China confident of full trade deal after truce with US 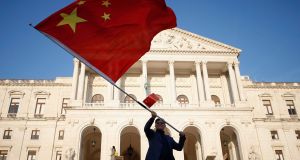 The trade disagreement between China and the US has weighed on markets this year. Photograph: Reuters

China is confident it can reach a full deal on trade with the US, despite threats from president Donald Trump to revert to tariffs if he doesn’t get a “real deal”, after the world’s two biggest economies reached a truce in their trade war.

Mr Trump and Chinese president Xi Jinping reached a temporary truce in their trade war at a meeting over dinner at the G20 at the weekend, but Mr Trump warned tariffs would be back on the table if they did not find a resolution.

“The negotiations with China have already started. Unless extended, they will end 90 days from the date of our wonderful and very warm dinner with President Xi in Argentina, ” Mr Trump tweeted. “I am a Tariff Man. When people or countries come in to raid the great wealth of our Nation, I want them to pay for the privilege of doing so. It will always be the best way to max out our economic power. We are right now taking in $billions in Tariffs. MAKE AMERICA RICH AGAIN,” he tweeted.

In a brief statement on its website, the Chinese commerce ministry said the talks had been “very successful”, and that China was very confident of implementing it.

“The trade teams from both parties will actively promote the negotiation work within 90 days in accordance with a clear timetable and road map,” it said. “China will start by carrying out the specific matters which have been agreed on. The faster, the better.”

The trade war has cast a shadow over financial markets this year, which initially welcomed news of the truce. However, the prospect of more trade tensions further down the road continues to weigh on the global economy.

“The 90 days is a win for the Chinese as it creates a lot more space and they need that time. It gets them through the National People’s Congress and Trump has said it can be extended. So it kind of freezes in place the current power structure,” Rodney Jones, principal of Wigram Capital Advisors, told The Irish Times in an interview.

“As the US economy slows it becomes harder for Trump to impose more tariffs, and China will do bits and pieces but won’t deliver much. We get frozen in time. It’s like peace talks that never go anywhere, but you stop fighting. Tariffs have a tendency to get frozen in place,” said Mr Jones, who was a partner at Soros Fund Management during the 1990s.

“The US-China relationship has fractured. This stops an escalation,” he added.

The US said China had committed to start buying more American products immediately, while lifting tariff and non-tariff barriers, as well as beginning talks about forced technology transfers and intellectual property protection.

The US has already put tariffs of $250 billion (€220bn) on Chinese goods, and vowed to add tariffs on a further $267 billion if Beijing does not change its practices. For its part, China has imposed duties on about $110 billion in US products.