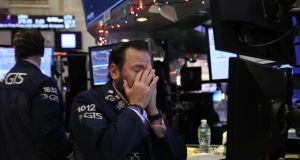 A global stock market slump wiped €2.5 billion off Irish stocks on Thursday as Ireland’s main stock index fell 3.11 per cent. Markets tumbled after the arrest in Canada of a top executive at Chinese telecoms group Huawei fanned concern over the ability of the US and China to make their trade truce permanent. “The stock market is signalling a recession is on the horizon, a recession that is man-made, with two back-to-back trading days of heavy losses that has sent investors running for the exits,” said Chris Rupkey, an analyst at MUFG.

In his analysis of the latest global stock market rout, Cliff Taylor writes that: “Underlying all of this are wider fears about the outlook for global growth.”

A post-Brexit VAT change threatens to close thousands of companies by squeezing their cash flows, the Republic’s biggest employers’ group fears. The UK’s exit from the EU in March will put the country outside the bloc’s current VAT regime, which allows businesses to immediately reclaim the charge on goods bought from Britain and Northern Ireland. However, once the UK leaves the EU in March, businesses in the Republic face the prospect of paying the VAT on goods imported from the UK at the point of entry while waiting up two months to reclaim the money.

For this week’s Agenda feature, Barry talks to several Irish business leaders about how they are preparing for Brexit, amid warnings that time is running out for preparation plans. Meanwhile, Derek Scally reports on how some Irish companies are already developing strong market ties with Germany.

In his Caveat column, Mark Paul calls on lawmakers to offer more protection for gig economy workers, highlighting the case of Deliveroo riders.

Finally, Dr Nora Khaldi, founder and chief science officer of Dublin biotechnology company Nuritas, has been chosen as The Irish Times Business Person of the Month for November, an award run in association with KPMG.

1 Should AIB compensate me for upsetting letter on arrears?
2 ‘I wouldn’t be a big saver. I tend to buy now and repent at leisure!’
3 Hugo MacNeill steps back from Goldman Sachs role
4 Irish company paid €1.2m a year by collapsed Blumenthal-linked Australian restaurant
5 Poll on second election, concerns over Irish pension gap, and Ireland’s rich list
6 Why bosses should not be afraid of speaking out on Instagram
7 Tax shifts won’t drive multinationals out of Ireland - Moody’s
8 Chris Johns: The Johnson administration will spend, and needs a quiet Treasury
9 Irish economy to grow by 3.4% this year, predicts EY
10 Artomatix buyer revealed as Unity Technologies
Real news has value SUBSCRIBE