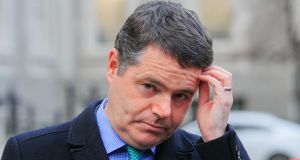 There is no scope to reopen Britain’s withdrawal agreement with the European Union, Minister for Finance Paschal Donohoe has said.

There is no scope to reopen Britain’s withdrawal agreement with the European Union, Minister for Finance Paschal Donohoe has said.

In a speech to the Peterson Institute for International Economics in Washington, Mr Donohue said that the withdrawal agreement is a “carefully balanced agreement and as with any such negotiations of this scale, there have been compromises on both sides.” He warned that the agreement could not be reopened.

Noting that the withdrawal agreement secures a transition period which provides certainty to citizens and businesses, Mr Donohoe said that Ireland wants to see “the closest possible relationship between the UK and the EU” in the future.

“The ambition to achieve a deep and comprehensive partnership between the EU and the UK set out in the political declaration is very welcome, and we will work to make this happen.”

He noted that the withdrawal agreement guarantees that there will be no hard border on the island of Ireland in any circumstances.

“From the very beginning, protecting the Peace Process and the Good Friday Agreement – and the open border on the island of Ireland that is so central to both - has been a priority for the Irish Government. ”

Mr Donohoe recounted to the audience that he had sat with 26 other EU finance ministers last Monday in Brussels to negotiate a way forward for deeper and more secure monetary union. “This is an expression of sovereignty, not the erosion of it.”

“We are committed to remaining at the heart of the EU,” he added.

Noting that Ireland is “at the centre of the transatlantic economy” he said that Ireland could be a bridge across the Atlantic after Brexit.

“We will be the only country in the EU that is an English speaking, common law jurisdiction. We have a young, well-educated population and the Government continues to build a business friendly environment, for businesses large and small, foreign and domestic,” he said, adding that Ireland will remain open to business and talent from the United States and elsewhere.

While Ireland was “not under any illusions about the challenges that Brexit will bring,” he said that the Government was “working hard to prepare, and to be ready for all scenarios.”

On tax, Mr Donohue said he welcomed recent reforms to the US tax code, which has seen US companies repatriate historical profits to the United States to be taxed.

Ireland has “played its part” in terms of addressing unfair corporate tax practices, including legislating for BEPS (Base Erosion and Profit Sharing) and new controlled foreign company rules.

He also stressed that Irish-US investment is a two-way street, highlighting the investment Irish companies have made in America.

Mr Donohue is due to meet US Treasury Secretary Steve Mnuchin later on Tuesday amid growing concern about continuing US sanctions on Russian individuals which are impacting Aughinish Alumina in Limerick.

The US Treasury on Tuesday announced it was extending the expiration of licenses connected to Russian energy giant Rusal until January 21st.

1 Basic income for all: Has the Covid crisis given us a new economic model?
2 Direct sea routes to Europe offer certainty in choppy Brexit waters
3 Only way is up for Stripe as valuation skyrockets
4 Pandemic brings a halt to Zara-owner’s Irish expansion
5 How a Dublin teenager is helping you bring your secrets to the grave
6 Unilever’s Dutch and British arms merge after 90 years ahead of Brexit
7 ‘I don’t need to do any of this. . .I don’t actually need to work.’
8 How long can Government afford to keep State pension age at 66?
9 Taylor Swift’s rerecording plan is music industry folklore in the making
10 High time: Netherlands moves to clean up absurd cannabis policy
Real news has value SUBSCRIBE