House prices in midwest up 21.5% over past year 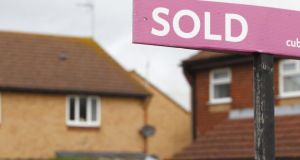 In Dublin, the cost of buying a home is increasing at a significantly faster rate in Dún Laoghaire-Rathdown compared with south Dublin. Photograph: Chris Ison/PA wire

House prices in the midwest have soared by more than a fifth over the past year, several times the slowing rate of growth in areas of Dublin, latest official figures show.

Against an overall 8.4 per cent increase in residential property prices nationally in the year to October, the figure was 21.5 per cent in the midwest, the largest hike in the State.

The smallest rise, outside the capital, was in the mideast, where prices are up 8.3 per cent, according to the Central Statistics Office.

“This situation has become prolonged and is now generational,” said the organisation’s director of financial services, Rachel McGovern. “It is appalling that so many people are forced to put their lives on hold.”

Ms McGovern said would-be buyers without substantial family support for a deposit, particularly in city areas, were being forced to pay rents “sometimes double” what mortgage repayments would be for the same properties.

In Dublin, the cost of buying a home is increasing at a significantly faster rate in Dún Laoghaire-Rathdown (8.2 per cent) compared with south Dublin (5 per cent).

The two areas represent the highest and lowest price growth in the capital respectively.

Overall in Dublin, average house prices rose by 6.6 per cent while apartments were up 5.7 per cent in the year to October.

Outside the city and county, average prices were 10.6 per cent higher, with the price of apartments (14.5 per cent) rising markedly faster than houses (10.3 per cent).

Residential property prices in Dublin remain about a fifth lower than their boom-time peak in February 2007, while elsewhere in the country they are down almost 23 per cent since their height in May 2007.

However, prices in Dublin have also risen 98 per cent from their February 2012 low, and are up almost 78 per cent in the rest of the State since their trough in May 2013.

According to a report on Tuesday from real-estate services firm CBRE, Irish housing market growth will continue to be “robust” in 2019, but is likely to be lower than in recent years due to the impact of rent pressure zones.

The EMEA real estate market outlook report for 2019 predicts that Ireland, France and Spain will experience strong growth in rent and capital values. Germany and the Netherlands are expected to enjoy the strongest growth in the region. The forecast reflects “favourable credit conditions and strong investor demand”.

The report states increased construction in Ireland in 2019 is expected to alleviate concerns regarding a lack of adequate housing supply to satisfy investor appetite. It also says the 4 per cent cap on rental growth in rent pressure zones has provided “a level of certainty to investors”.