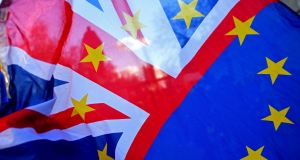 A demonstrator carries a combined British and EU flag during an Anti-Tommy Robinson and Ukip rally in central London on December 9th, 2018. Photograph: Dylan Martinez

Most economic forecasts tend to say the same thing and most tend to be wrong. In the case of Ireland, the situation is further complicated by multinationals, which have denuded gross domestic product (GDP) of any real meaning.

Between 2011 and 2014, the expiry of patents in the pharma sector caused a contraction in Irish exports and a knock-on impact on GDP.

Then came the global clampdown on multinational tax avoidance, an event flagged as a major risk to low-tax jurisdictions like the Republic, but which ended up being a boon for the Irish economy courtesy of a massive onshoring of assets.

Nobody came close to grasping what was going on until the Central Statistics Office (CSO) announced in 2016 that the economy had grown by 26 per cent the previous year, a figure that was widely derided as leprechaun economics.

With the Brexit wave now about to crash upon these shores we’re again fumbling around, weighing up various forecasts, most of which will prove to be wrong. The question is how wrong. Will they undershoot or overshoot the real impact of Britain’s increasingly fractious EU divorce?

In its latest report, the Economic and Social Research Institute (ESRI) predicts the Irish economy could see GDP nearly halved to 2.8 per cent next year if the UK exits with no withdrawal agreement and World Trade Organisation (WTO) rules and tariffs apply.

In the context of GDP growth of 7.8 per cent last year this is practically anaemic. And there’s a real worry that the ESRI’s forecast doesn’t come close to capturing the full impact of a chaotic Brexit, which a no-deal scenario seems imply.

The think tank admits that its forecast really only assesses the impact of the underlying changes to trade and fails to control for “heightened consumer and producer uncertainty, disruptions in financial markets and lack of access to international supply chains”.

The Bank of England made a stab at this nightmare proposition last month when it forecast that a no-deal scenario could have worse consequences for the UK economy than the 2008 financial crisis, a startling assertion in itself, with output falling by 8 per cent, the pound tumbling by up to 25 per cent and house prices falling by 30 per cent, with most of the impact coming in the first year.

The bank’s worst-case scenario, dismissed as another example of “Project Fear” by Brexiteers, assumes that everything that can go wrong will go wrong, from goods being stuck in Calais to a speculative run on the pound.

In recent months, we’ve witnessed more attempts at capturing the short-term impact of Brexit. The notion that as we approached next year’s March deadline economic common sense would prevail and that the potential fallout would be limited has proven misplaced. The political impasse in the UK means that a chaotic Brexit is now as likely as a soft Brexit and even no Brexit. A healthy scepticism of forecasts is advised.