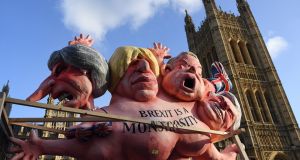 Effigies of UK politicians: ESRI says if the UK left leaves the EU without a deal, growth in Ireland may be cut to 2.6 per cent from an otherwise 4.2 per cent. Photograph: Andy Rain

A no-deal Brexit could almost halve Irish economic growth next year, the Economic and Social Research Institute (ESRI) has warned.

In its latest economic commentary, the think tank modelled the short-term impact of various Brexit scenarios on the Irish economy.

It found that if the UK left the EU without a deal, and assuming World Trade Organisation (WTO) rules then apply, this would curtail growth here to 2.6 per cent compared to 4.2 per cent in the absence of Brexit.

The ESRI warned, however, that the forecast probably understated the full impact of a no-deal Brexit on the Irish economy as it assumed a smooth adjustment which was “probably unrealistic”.

“A variety of short-run effects such as heightened consumer and producer uncertainty, disruptions in financial markets and lack of access to international supply chains are not controlled for,” it said.

“These could be quite significant in magnitude resulting in a more substantial impact on the short-term outlook than suggested here,” the institute said.

This is the first time the short-term impact of Brexit on the Irish economy has been examined.

The analysis comes on the back of a stark warning from the Bank of England that a no-deal scenario could have worse consequences for the UK economy than the 2008 financial crisis, with output falling by 8 per cent, the pound tumbling by up to 25 per cent and house prices falling by 30 per cent.

The ESRI’s analysis suggests headline growth here would be reduced by 1 percentage point to 3.2 per cent next year even if the UK opted to join the European Economic Area (EEA), which would give it full access to the single market.

However, as EEA membership is only open to EU or European Free Trade Association (EFTA) members, the UK would have to apply for EFTA membership after it leaves the EU, which could up to take 12 months.The ESRI therefore concluded that the EEA option was unlikely to impact on either Irish or UK growth in 2019.

However, it criticised the Government’s recent budget as too expansionary given the current strength of the economy but refrained from calling it “imprudent” as the Irish Fiscal Advisory Council did last month.

The €4.5 billion spending increase earmarked in Budget 2019 would have inevitable implications for the public finances with a deficit now likely in 2019.

However, it noted that much of increased expenditure was being channelled into badly needed capital projects as opposed to tax cuts, a feature of the giveaway budgets in the lead-up to the financial crisis of 2008.

“It is imperative that policymakers do not base expenditure on potentially volatile revenues going forward,” it said.