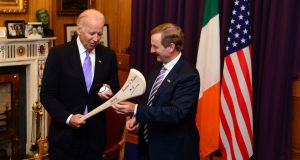 As the Brexit trade negotiations reach their crunch point, the election of Joe Biden as the next US president has given a last-minute impetus to the prospects for a successful outcome.

The UK is a proud and powerful country. Its negotiating approach will be decided in London rather than Washington. However, the change of US administration will undoubtedly give Boris Johnson pause for thought. He will have to factor in four new realities.

First, perhaps most importantly, Trump’s departure radically shifts the dial on the global rise of populism. The populist playbook which delivered Trump to the White House, Johnson to Downing Street and Brexit to Britain no longer looks like a manual for inevitable political success.

The transatlantic flirting over the past few years now seems utterly foolish. In the post-Trump world, Poland, Hungary and Brazil look more like awkward outliers than louche political fashion icons.

A UK-US trade deal, the centrepiece of Brexit’s so-called Going Global agenda, will be far from the priorities of the Biden government

The UK will now find itself nudged towards a more traditional relationship with the United States, based on historically shared principles rather than an infatuation with a new-fangled narrow nationalism. It will find itself obliged, over time at least, to prioritise its other important international friendships, based on interests and values, most notably with the European Union and its member states.

Second, Biden is a proud Irish-American. He is not remotely anti-British. However, he is aware in his bones of the history, importance and complexity of the Belfast Agreement. He, as well as the sophisticated team he is assembling, understand well that protecting that agreement means more than well-meaning platitudes about the UK not intending to erect barriers on the Irish border.

It means implementing the legally binding Northern Ireland Protocol agreed between the UK and EU, which takes account, as it must, of the reality of the European Union’s single market.

The price of maintaining the illegal provisions of Johnson’s Internal Market Bill has just gone up from no trade deal on Brexit to include also a souring of British-US relations at a crucial moment for the Johnson government. This is all the more so because Biden, unlike his predecessor, attaches profound importance to the wider respect for international law.

He would readily see the delightful absurdity of a Conservative spokesman’s recent claim that breaking the law “is necessary in order to provide legal certainty”.

Third, a UK-US trade deal, the centrepiece of Brexit’s so-called Going Global agenda, will be far from the priorities of the Biden government. The Trump administration had been making noises about the value and likelihood of such a trade deal. He would have done the UK no favours in any such negotiations but he might well have prioritised a deal both because he sees Johnson as a kindred spirit and because of his dislike for the decency of the European Union. Last week US voters changed that equation.

If there is to be a deal in the coming small number of days, both sides will need to think creatively and to find compromises

I sincerely hope that the UK will one day reach a trade deal with the US, but I have little doubt that the new US administration will see trade relations with the European Union as a greater priority.

Fourth, wiser voices in the UK government must surely realise that the UK’s standing in Washington, and its prospect of exercising influence on every international issue from climate change to security, will be greatly enhanced if it can settle into a friendly and co-operative post-Brexit relationship with the EU.

For decades now, Britain’s case for its special relationship with Washington was based largely on its influence at the heart of the European Union. It has casually given up that advantage. But it can still salvage something by remaining part of a coherent Europe, bound by friendship and values, something that in practice will be made more difficult if European paths diverge further because of a failure to agree post-Brexit trading arrangements.

The EU will also see the Biden administration as an opportunity – perhaps a unique opportunity – to reset transatlantic relations. It will see no advantage in any deepening confrontation with the United Kingdom. It undoubtedly wants a Brexit trade deal; the change of US administration will encourage it to that end.

If there is to be a deal in the coming small number of days, both sides will need to think creatively and to find compromises. However, those compromises will not involve either the undermining of the EU’s single market or acceptance of the breach of international law.

Events in the United States have placed greater pressure on UK negotiators. They must now be thinking very carefully about the implications of a Biden presidency. The new president will not want to be asked to choose between the European Union and the United Kingdom. If he is forced to choose, I would, in the American phrase, bet my bottom dollar on where he will judge US priorities to lie.

Bobby McDonagh is a former ambassador to London, Brussels and Rome