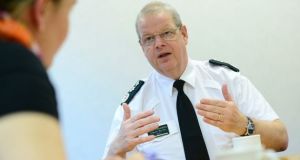 PSNI chief constable Simon Byrne has said there is a “tacit acceptance” that in the event of a no-deal Brexit, Northern Ireland and the Republic will work to strike bilateral arrangements to deal with cross-Border policing issues.

Mr Byrne, in being questioned by the House of Commons Northern Ireland Affairs committee on Wednesday, said he could not be specific about what the North-South policing arrangements would be until after the withdrawal negotiations were concluded.

However, the chief constable indicated they would be cumbersome.

Mr Byrne raised the issue of extradition difficulties in the event of the United Kingdom reverting to the European Convention on Extradition rather than the current speedier arrangements under Europol.

He said the average time to process a European Arrest Warrant now is 48 days while under the convention it was estimated it “would take a year”.

“It is imagining a world where you are going from wifi to a modem. You will still have connectivity but it will take a lot longer,” he said.

Regardless of the outcome of the Brexit negotiations, he forecast continuing strong cooperation between the Garda and PSNI.

Mr Byrne said there were daily exchanges of information with the Garda. “We are quite confident that no matter the outcome there is the potential to bilaterally negotiate different arrangements if we need to with the Garda in a more dire circumstance,” he said.

“If we end up with a non-negotiated exit, whilst time is tight, we’ve got the weeks ahead to try and plug any gaps bilaterally,” said Mr Byrne.

“I think there is a tacit acceptance if we end up in a no-deal scenario that then, in the context of Ireland, we could press forward with trying to negotiate bilateral agreements quickly,” he said.

Mr Byrne was asked by the Conservative chairman of the Westminster committee, Simon Hoare, if the Garda Commissioner Drew Harris had given any commitments about a political “appetite” in the South for a “mutually beneficial approach with regard to security and intelligence cooperation”.

Mr Byrne said Mr Harris hadn’t given any such assurances “because he is having to work, if you like, behind the shield of his Government, just as I’m doing at the moment”.

It was about “waiting to see in the next few weeks what we have to face” and then deciding on how to respond. But, he added, the “framework is already there that enables day-to-day collaboration”.

There was “confidence that the two organisations can work collectively together”.

Mr Byrne generally agreed with DUP committee member Ian Paisley that over the past 10 years smuggling and other forms of cross-Border crime was worth about £1 billion (€1.1billion). He said that currently the police were “tracking, investigating or disrupting” 80 organised crime gangs in Northern Ireland with 16 of them having some sort of North-South “footprint”.

Mr Paisley said “with or without Brexit” there was a cross-Border criminal problem that would have to be addressed.

Later during the session Mr Byrne said that “in the short-term not a lot will change in terms of the pattern of criminal behaviour” after Brexit, but that equally organised criminals were assessing if new opportunities would arise.

“The mindset and adaptability of organised crime groups is quite fertile and our assessment is they are in a bit of wait and see,” he added.

The British National Crime Agency operations director Steve Rodhouse told the committee that criminals were “agile” and how they operated at the Border after Brexit “may evolve with time as criminal perceptions change”.

He said that some criminals may seek to bring drugs and other “commodities” into the UK by an “alternative route” through the Republic.