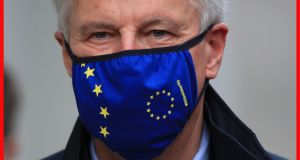 That the House of Lords, whose democratic credentials leave a little to be desired, should give the UK government a welcome lesson in how to conduct itself on the international stage and in honouring its word is nicely ironic. There’s life yet in this relic of medieval politics. Tradition and honour trump reckless disregard for convention and treaty commitments. The principle defended, “pacta sunt servanda” – agreements are to be kept and operated in good faith – is the oldest cornerstone of international law and enshrined the Vienna Convention on the Law of Treaties 1969.

The Lords overwhelmingly voted on Monday to delete controversial clauses in the Internal Market Bill, important provisions allowing regulations that flout international treaty commitments – “notwithstanding any relevant international or domestic law with which they may be incompatible or inconsistent”. The explicit target of the Bill’s opt-out clauses is the Ireland protocol of the October 2019 EU/UK withdrawal agreement, and its requirement for some customs checks on the Irish Sea between the North and Britain to avoid the necessity of a hard border on the island.

Far from strengthening its negotiating hand in talks with the EU, as the Conservatives claim, the Bill has significantly complicated the prospect of agreeing a post-Brexit trade deal on which last-ditch talks resumed in London yesterday. Who could sign up to any new agreement when the good faith of a negotiating partner is called into question by their open disrespect of the agreement’s immediate predecessor? Boris Johnson’s buyer’s remorse on the withdrawal agreement cannot be a basis for UK diplomacy.

And yet this government is pinning the future prosperity of the UK on precisely such deals across the globe, not least in the US where president-elect Joe Biden has made it clear he will not sign a new trade deal if the Belfast Agreement is undermined.

British foreign secretary Dominic Raab’s attempts, with Trump-like inverted logic, to cast the EU as the real demon, will not wash anymore. “We’ve been very clear we are absolutely committed to respecting the Good Friday agreement but our argument is, and it was good to have the opportunity when I was in Washington to explain, it is the EU who has put pressure on that with the approach it has taken,” he told the BBC. But his sympathetic interlocutor is being moved on.

Despite its bloody nose in the Lords, the British government intends to restore the amended clauses when the Bill returns to the Commons in early December. An agreement with the EU before then could provide Johnson with the political cover he needs inside the Tory Party for an about-face to leave it amended. But that would mean doing a deal with Brussels, and time is running out.