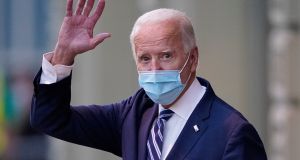 Each day last week, as the tally of votes for Joe Biden mounted in key states such as Pennsylvania, the daily toll of people infected with Covid-19 in the United States set new records.

While the mounting public-health crisis received relatively little attention during the count, this week president-elect Biden has immediately focused on it. This crisis will clearly dominate his early presidency.

For the next 10 weeks, however, the Trump administration will remain in charge, and given cases grew threefold in the last 10 weeks, it is possible they could have multiplied at a similar rate to reach more than 400,000 new cases a day by inauguration day.

To bring the pandemic under control in the US there will, inevitably, have to be some form of lockdown, which will come with a heavy economic cost. To date the outgoing Congress has refused to pass a second stimulus package to offset the potential serious negative economic effects of such action, effects which will be felt most by low-income households.

When lockdowns occurred in March and April across much of the European Union and the US, there was very prompt action by governments to provide support to the households and companies that were seriously affected. In many cases, including the US, this initial bout of fiscal support was quite generous, so that those households worst affected by the lockdown were largely insulated from its initial effects.

As a result of the US stimulus in the first half of this year, the European Commission estimates that real household income in the US in 2020 will be up almost 2 per cent compared with last year, in spite of the fact that GDP will be down almost 5 per cent.

Because US households, like households in Europe, could not spend their income on many services they would normally buy, such as holidays or eating out, they ended up saving much more than normal.

Last month the mayor of Manchester faced a very similar dilemma to US states but, unlike in the US, the UK government has eventually extended its pandemic supports

In the second quarter of this year, US households saved about a quarter of their incomes compared with the normal savings rate of about 8 per cent. While most of this saving came from better-off households, even those who were laid off experienced a limited period when their income was maintained by government transfers.

However, with the continuing serious effects of the pandemic on the US economy the beneficial effects of the stimulus are running out. For low-income households the savings, such as they were, would be rapidly exhausted if further lockdowns were to occur, because of the numbers who would be thrown out of work. As in Europe, it is those in low-income service jobs who are most at risk of layoff.

In Europe we have been obliged to extend the temporary stimulus measures introduced in the spring to cover the rest of the year and into next year, as we tackle the second wave of infection through further lockdowns. Without this expanded support, those now laid off by current restrictions would suffer a grievous loss of income, and businesses would be even worse affected.

By contrast, the US Congress has not sanctioned any new or continued stimulus package. If this blockage continues into next year, the European Commission forecast that in 2021 real personal income in the US will fall by more than 4 per cent, even if there were no further major restrictions on economic activity. With continuing elevated levels of unemployment, the social cost could be severe.

The power to lock down local economies in the US generally lies with individual states. However, as individual states do not have the power to provide an offsetting fiscal stimulus to supplement the incomes of those affected, they face a very difficult choice: to try to halt the pandemic at a cost of serious hardship for many, or allow the pandemic to continue to wreak havoc. It is only if the federal government provides the fiscal stimulus that the very severe economic costs of local lockdowns can be offset.

Last month the mayor of Manchester faced a very similar dilemma to US states but, unlike in the US, the UK government has eventually extended its pandemic supports.

Biden’s coronavirus taskforce may well come up with a good plan for dealing with the growing US public-health crisis. However, until late January he will not have the power to implement any of their policy recommendations. In addition, as the Democrats seem unlikely to control the senate, getting Congress to pass an essential second fiscal stimulus will be a difficult task, requiring all of the new president’s negotiating skills.