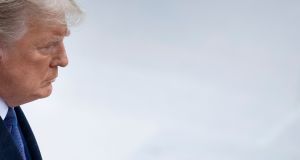 US President Donald Trump has presided over the handling over the Covid-19 pandemic, which is raging in the US and impacting the economy. Photograph: Brendan Smialowski/AFP via Getty Images

The number of Americans filing new claims for unemployment benefits fell to a seven-month low last week, but the pace of decline has slowed and further improvement could be limited by a raging Covid-19 pandemic and lack of additional fiscal stimulus.

Initial claims for state unemployment benefits totalled a seasonally adjusted 709,000 for the week ended November 7th compared to 757,000 in the prior week, the Labor Department said on Thursday. Economists polled by Reuters had forecast 735,000 applications in the latest week.

Despite claims dropping to their lowest since March, they remained above their 665,000 peak during the 2007-09 Great Recession. Weak demand, especially in the services sector, is forcing employers to shed workers. Layoffs could accelerate as new coronavirus cases explode across the country.

The frail labour market is one of the major challenges President-elect Joe Biden faces when he takes over from President Donald Trump next January.

Daily new coronavirus infections are exceeding 100,000 and hospitalisations are surging as cooler weather draws people indoors, prompting some state and local governments to impose new restrictions on businesses. Even without restrictions, consumers are likely to stay away from places like bars, restaurants and gyms, fearing exposure to the respiratory illness. Restaurants and gyms moved outdoors during summer.

Unemployment claims peaked at a record 6.867 million in March. Much of the improvement in the labor market came from businesses recalling laid off and furloughed workers as companies and the unemployed accessed their share of more than $3 trillion in government coronavirus relief.

But fiscal stimulus has run out, which will make it harder for the economy to generate enough jobs to absorb millions of unemployed Americans.

The government reported last week that nonfarm payrolls rose by 638,000 jobs in October, the smallest gain since the jobs recovery started in May. That followed 672,000 jobs added in September. Only 12.1 million of the 22.2 million jobs lost in March and April have been recovered. – Reuters

5 ‘I love the place’: US billionaire John Malone on his €300m Irish portfolio