Economy grew by record 15.5% in third quarter but expected to shrink in fourth 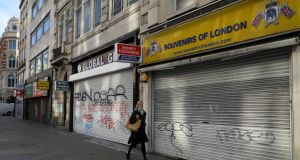 The UK economy grew by a slower-than-expected 1.1 per cent in September from August even before the latest Covid-19 restrictions on businesses, leaving it lagging other rich nations in its recovery from the shock of the pandemic.

Analysts had expected growth to slow to 1.5 per cent in September. Thursday’s official data underlined that the economy is likely to go back into contraction as 2020 ends, with uncertainty about a December 31st deadline for a Brexit deal adding to the drag from coronavirus disruption.

In July-September, gross domestic product grew by a quarterly record of 15.5 per cent. But that failed to make up for its nearly 20 per cent crash in the second quarter, which included the first coronavirus lockdown.

The economy is being propped up by more than £200 billion worth of emergency spending and tax cuts ordered by finance minister Rishi Sunak and by the Bank of England’s bond-buying programme, now expanded to almost £900 billion.

Despite those efforts the UK – which passed 50,000 coronavirus fatalities on Wednesday, Europe’s highest death toll – has suffered the biggest GDP drop among major economies listed by the Office for National Statistics.

Economists say that is because initial lockdown measures lasted longer than those in other countries and had a particularly severe impact on services, which make up 80 per cent of the British economy.

GDP remained almost 10 per cent smaller going into the final quarter than at the end of 2019, twice as big as the falls in Italy, Germany and France and nearly three times the size of the US drop, the statistics office said.

“This makes it all the more crucial that the chancellor gets the timing, balance and scope of his post-Covid economic strategy right – with tax rises needed by the middle of the decade.”

Last week the Bank of England said the world’s sixth-biggest economy was likely to shrink by a record 11 per cent in 2020 before growing by just over 7 per cent in 2021.

News of a potentially effective Covid-19 vaccine has since raised hopes of a stronger bounce-back next year.

Mr Sunak said steps taken to restrict the spread of Covid-19 were likely to have slowed economic growth since September.

“Today’s figures show that our economy was recovering over the summer, but started to slow going into autumn,” Mr Sunak said. “The steps we’ve had to take since to halt the spread of the virus mean growth has likely slowed further since then.”

The Bank of England said last week that GDP could shrink by 2 per cent in the October-December quarter.

Prime minister Boris Johnson ordered most people in England to stay at home for a month from last week in an attempt to slow a second wave of coronavirus infections.

Unlike in the first lockdown, the government has encouraged construction and manufacturing firms to stay open and it has not shut schools and universities.

The statistics office said Britain’s dominant services sector – which includes many firms that rely on face-to-face interaction with clients and face the toughest restrictions – grew by a weaker-than-expected 1 per cent in September from August.

Food and accommodation services output fell by more than 8 per cent after a bumper August when the government subsidised meals for diners.

Manufacturing inched up by just 0.2 per cent while construction grew by nearly 3 per cent, helped by a turnaround in the housing market.