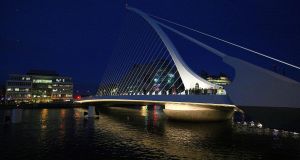 Ireland’s service sector saw business activity expand sharply in May as the rate of new order growth rose to a five month high, according to a report compiled for AIB.

Digicel, Denis O’Brien’s Caribbean mobile operator, has won the first round of a legal battle against the government of one of its island markets, which wants to confiscate some of Digicel’s high-speed spectrum to give it one of its rivals. Mark Paul has the details.

Ireland’s services sector saw business activity expand sharply in May as the rate of new order growth rose to a five month high, according to a report compiled for AIB, writes Peter Hamilton.

The National Asset Management Agency is resisting calls from the Oireachtas Public Accounts Committee to verify that debtors in default are not involved in the illegal purchase of assets of the so-called bad bank. Joe Brennan reports.

A number of carmakers here have joined CIÉ, Ervia, Bord Gáis Energy and Bord Na Móna to present a plan to the Government’s low-emission vehicle taskforce on how to bring hydrogen transport to Ireland, reports Peter Hamilton.

Smartphone sales will remain weak this year, according to two new forecasts. However, they are expected to rebound in 2020. Charlie Taylor has the details.

Counterfeiting and piracy are resulting in estimated annual sales losses of more than €900 million in Ireland, according to an EU report released on Thursday, writes Frank Dillon who also elaborates on the the issue here.

The Internet of Things is not just big, its really scary, warns Karlin Lillington in her weekly column.

Cantillon ponders the law of unintended consequences that is MiFID II, the local rates conundrum and hears Dómhnal Slattery take on the State’s future as a start-up hub.

When it comes to supporting a culture of entrepreneurship, how does Ireland stack up against the global competition? Avalon CEO Dómhnal Slattery set out to find out, and he has compiled his findings in a report titled “Project i”. He talks to Ciarán Hancock in ourInside Business podcast about what’s in the report, where Ireland falls short for its start-ups and the role of state agencies like Enterprise Ireland.

Ciara O’Brien picks out the tech that will make your summer holidays go that little bit better and she also reviews the fitness app Fiit.

CJ Hughes charts the rise and rise, from the bedroom to the arena, of electronic sports.

Chris Horn argues that the next big thing in consumerism will be coming to grips with finite resources.

While you’re here why not check out our Top 1000 Irish companies and our Business Awards sites.

Cliff Taylor: Deal or no deal we are now heading for a hard Brexit 13:09
Danish retailer Jysk on track to double Irish store numbers by end of 2021 12:49
Central Bank rules out changes to mortgage rules during pandemic 12:31
Admission of mistake in Oxford vaccine dose raises doubts over reliability 12:30
Irish Life fund pays €49m for 94 Dalkey apartments 12:02

1 Karlin Lillington: How I managed to cut my mobile phone bill by at least half
2 Admission of mistake in Oxford vaccine dose raises doubts over reliability
3 State may face €1bn in compensation in Covid-19 case, Press Up claims
4 Smarter ways to heat your home: Eight of the best modern systems
5 Irish Life fund pays €49m for 94 Dalkey apartments
6 Central Bank rules out changes to mortgage rules during pandemic
7 Fiona Reddan: Who’s afraid of Revolut? Not AIB and BOI it seems
8 Lahinch Golf Club runs out of its own cash after €3m Covid-19 hit
9 Workhuman predicts double-digit revenue growth for 2020
10 Danish retailer Jysk on track to double Irish store numbers by end of 2021
Real news has value SUBSCRIBE