Piracy losses amount to 54% of total Irish sales, according to EU report 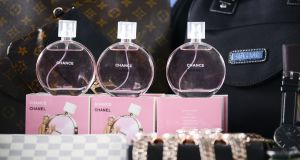 Incentives for consumers to purchase counterfeit goods and services include lower prices, easy access and low degrees of social stigma associated with such activity.

Counterfeiting and piracy are resulting in estimated annual sales losses of more than €900 million in Ireland, according to an EU report released on Thursday.

Analysis of 11 key business sectors, as part of a wider report by the European Union Intellectual Property Office (EUIPO), estimates piracy loses at €909 million in Ireland, equivalent to 5.4 per cent of total sales. This represents €192 per citizen per annum, according to the report.

In the EU as a whole, counterfeiting and piracy loss is estimated at about €60 billion a year, equivalent to 7.4 per cent of all sales in the 11 categories studied.

The sectors examined in the EUIPO 2019 Status Report on IPR Infringement were: clothing, footwear and accessories; cosmetics and personal care; sports goods; toys and games; jewellery and watches; handbags and luggage; recorded music; spirits and wine; pharmaceuticals; pesticides; and smartphones.

The clothing, footwear and accessories sector is the largest of the sectors studied in terms of sales volume and employment. The report estimates EU-wide sales losses of more than €28 billion a year or 9.7 per cent of total sales. In Ireland, lost sales in this sector are estimated at about €323 million or 9.2 per cent of sales.

In the smaller cosmetic and personal care sector, losses are proportionally higher, with losses in Ireland of about €98 million or 14 per cent of all sales. This compares with total EU-wide losses of about €7 billion or 10.6 per cent of sales.

The report highlights the likely effect of counterfeiting on employment and suggests that given that legitimate manufacturers produce less than they would do in the absence of counterfeiting and piracy, the number of direct jobs lost across the EU could be in the region of 468,000.

Huge potential markets with high financial rewards together with lenient sentences make it attractive for criminal gangs to engage in counterfeiting. According to the report, the modus operandi of such gangs is becoming increasingly complex as technology and distribution channels evolve, hand in hand with the breath of products being counterfeited.

Gangs are increasingly using the internet to distribute their products, and to promote the distribution and consumption of illegal digital content.

Internet sites selling counterfeit goods are also benefitting from additional revenues from advertising. This includes so-called “high-risk” ads such as adult, gaming and malware but ironically they are also sometimes supported by ads from legitimate brands, which then suffer in two ways from advertising on such sites, namely damage to their own brands and providing status to the rogue website.

The study also looked at the demand side, including the attitudes of EU citizens to consuming intellectual property right infringing goods and services. Incentives for consumers to purchase counterfeit goods and services include lower prices, easy access and low degrees of social stigma associated with such activity.

The EUIPO says that in response to the growing problem of IPR infringement, it is taking a range of measures from closer working with Interpol, including funding a specialised IP crime union within the police agency, to supporting the European Commission’s efforts to address the supply of counterfeit goods in third countries, to helping SMEs protect their IPRs to public information campaigns to highlight the economic and social impact of counterfeiting.