Enormous arenas are being built with electronic sports in mind 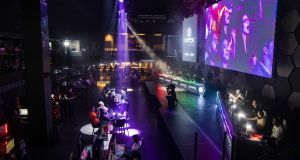 The rise of esports – electronic sports – is no surprise to anyone who has followed the video game industry. They are expected to bring in more than €1 billion in global revenue this year, as millions of fans watch hundreds of events from all over.

But those fans typically view the matches from home on streaming platforms such as Twitch and YouTube. Only $104 million (€93 million), less than 10 per cent of the total revenue in 2019, is expected to come from merchandise and ticket sales, according to Newzoo, an esports analytics firm. For fans to spend more money, they need an environment that provides a richer experience.

To accommodate that need, developers had focused on adapting smaller spaces, including nightclubs and even a 1950s office complex. Now, enormous arenas are being built with esports in mind.

The $10 million Esports Stadium Arlington in Texas, which opened in November in the city’s convention centre, is the largest esports centre in North America, with flexible seating, a state-of-the-art broadcast studio and an LED wall 26m long. And in Philadelphia, developers are planning to build Fusion Arena, the first new construction to be dedicated to professional gaming, offering 3,500 seats and a training facility.

One of the more popular destinations is Blizzard Arena, a small esports facility tucked inside a midcentury office building in Burbank, California. A former television studio for shows such as The Tonight Show Starring Johnny Carson and Access Hollywood, the 1,400sq m space is operated by Blizzard Entertainment for its Overwatch League.

Jeff Worthe, president of Worthe Real Estate Group, which owns the building with Stockbridge Real Estate, said soundstages were ideal locations for esports events because of their infrastructure.

“Esports are definitely a growing segment of the entertainment industry,” said Worthe, who expects more arenas to spring up in the area.

And last year, Allied Esports opened the HyperX Esports Arena, a 2,800sq m former nightclub inside the Luxor Hotel and Casino in Las Vegas. The arena, named for a maker of headsets and other gaming accessories, hosted a League of Legends all-star event last winter, as well as an NBA 2K League tournament in May. The next event will be an Allied Esports Rainbow Six Minor tournament in June.

In between tournaments, the arena has a rotating lineup of local events for games such as Fortnite, Mario Kart and Rocket League. Casual gamers can buy hourly passes for PC, Xbox and PlayStation gaming stations or play retro gaming consoles for free.

Other places are outfitting themselves for esports on an occasional basis, such as Boardwalk Hall in Atlantic City, New Jersey, a 1929 building that typically puts on comedy shows, concerts and arena football. In April, a chandelier-adorned theatre in the building presented an esports competition, a college tournament that included games such as Dota 2, Apex Legends and NBA 2K.

It came after a makeover by HOK, a sports-focused architecture firm with a growing esports practice, which helped reconfigure the stage, change the lighting and set up a broadcast studio for livestreaming, said Rashed Singaby, a firm senior associate whose previous work includes the Mercedes-Benz Stadium, home of the Atlanta Falcons.

HOK, based in Kansas City, is funnelling more resources into the growing field. Two years ago, it had no designers working on esports; today, it has 15, said Singaby, who added he has had commissions for five esports projects in the past year.

Developers are now knocking on HOK’s door, including owners of empty big-box stores hoping to repurpose them, Singaby said.

“The numbers don’t lie,” he added. “The commitment to this ecosystem has been gigantic in the last 10 years. We don’t think this is going away.”

But conversions and remodelling pale in comparison with the planned Fusion Arena in Philadelphia, which will be the first space built specifically for esports in the United States.

The 3,500-seat, $50 million project will be the home for the Philadelphia Fusion, a two-year-old team that competes in the Overwatch League, a franchise in which players from all over the world battle in a futuristic first-person shooter. Ground-breaking for the arena, which is being developed by the Cordish Companies, is expected this summer for a planned opening in 2021.

Equipped with a production studio, a training centre and three private suites lined with bars and fridges, the 5,600sq m development will sit in the middle of the South Philadelphia Sports Complex, which includes the Wells Fargo Center, where the Flyers and the 76ers play.

Not only will the arena project help esports cement its status in the mainstream, experts say, it’s also expected to unleash a wave of similar projects.

“Linking the arena to an existing sports complex will make people realise this is not just about video games being played by kids,” said Barry Seymour, executive director of the Delaware Valley Regional Planning Commission, a regional advocacy group. “This is a real sport.”

The design of the Fusion Arena breaks with that of a typical stadium. Seats will be positioned to see massive overhead screens that display the matches, said Brian Mirakian, a senior principal with Populous, an architecture firm known for its football and baseball stadiums that designed the arena.

Also, because tournaments can last eight hours, fans will be able to stretch their legs in a roomier-than-usual concourse dotted with bar stations, food vendors and a merchandise store.

Spectators will need powerful wifi connections, as they exchange play-by-play commentary with others on social media. Mirakian said the arena would be wired with “cutting-edge technology” courtesy of Cordish’s development partner, Comcast Spectacor, a subsidiary of the media conglomerate Comcast and owner of the Wells Fargo Center.

Aside from getting fans to open their wallets, creating a brick-and-mortar home for esports can draw another revenue source: marketers.

“Advertisers are trying to reach a ton of people that are difficult to reach otherwise,” said Eric Haggstrom, who analyses the video game industry for eMarketer, a research firm. Gamers tend to have disposable income, but they don’t consume traditional media, even social media offerings like Facebook, Haggstrom said.

In general, esports already have big corporate backers. Sponsors of the Overwatch League include T-Mobile, Coca-Cola and Toyota. Sponsorships are a crucial revenue stream; in 2019, they are expected to total $457 million in revenue, eMarketer said.

More broadly, the Fusion Arena could put North America on closer footing with the East, where esports centres are prevalent. China is already home to the first esports stadium built from the ground up, which opened in Chongqing in 2017. South Korea has long been a leader in esports, with multiple TV channels dedicated to broadcasting competitions, which are often held in large stadiums to accommodate the crowds.

Despite the excitement, analysts say it can be risky to dedicate a whole building to a single video game such as Overwatch, as tastes change quickly.

“Publishers are coming out with new games every month,” Haggstrom said. “It’s a very competitive environment.”

Fusion Arena is not putting all its chips on Overwatch. The league has a seven-month season, which leaves five months of programming to fill to help cover development and operating costs.

During the offseason, rows of seats and even the stage at Fusion Arena can be easily removed to create extra space for games such as Fortnite that can have 100 players. The arena can also handle small concerts, business meetings or lectures, said Blake Cordish, a vice-president at the developer.

The facility also furthers Cordish’s goal to make the area a broader entertainment district, which includes Xfinity Live, a bar-and-restaurant complex owned by Cordish and Comcast.

“We know your home team won’t win every time,” Cordish said. “But we want you to have fun every time.” – New York Times News Service