Carmakers join CIÉ and others to promote benefits of hydrogen transport 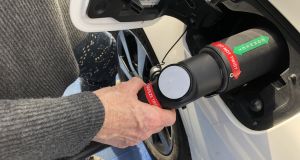 Toyota and Hyundai are members of Hydrogen Mobility Ireland which wants to facilitate production of low-carbon hydrogen for transport. Photograph: iStock

A number of carmakers here have joined CIÉ, Ervia, Bord Gáis Energy and Bord Na Móna to present a plan to the Government’s low-emission vehicle taskforce on how to bring hydrogen transport to Ireland.

Toyota and Hyundai are two of the members of the group – Hydrogen Mobility Ireland (HMI) – which wants to facilitate production of low-carbon hydrogen for transport.

The use of hydrogen, the group says, can enable zero emissions transport. The fuel is mixed with air to produce electrical power for a vehicle and water vapour as the only byproduct.

HMI said its mission was to “plan a path to mass market introduction of fuel cell electric vehicles” and it intended to present its findings to a range of interested parties in the coming months, including the State’s low-emission vehicle taskforce.

The group suggested that hydrogen, rather than electrically charged vehicles, was expected to be the preferred zero emission technology for longer range drivers but that it also offered a way to decarbonise heavy goods vehicles and buses.

“Climate change is now at the fore of the country’s political agenda, and we need to both increase and focus our efforts to get real traction on this,” said Mark Teevan, a director of Toyota Ireland.

In addition to carmakers and transport companies, HMI includes stakeholders in the fuel supply area to ensure stability in the supply chain.

Policy stakeholders in the group include Government departments both in the Republic and Northern Ireland, and the Sustainable Energy Authority of Ireland.

Element Energy, a low-carbon energy consultant, will advise the group, which intends to develop a detailed strategy over the coming six months.