Tesla’s new solar roof is a leap forward – but who can afford it? 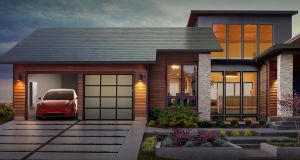 Tesla has begun taking orders for its transformative new solar roof. The pricing is competitive, and it marks the final piece in Elon Musk’s vision for a grand unification of his clean-energy ambitions combining solar power, home batteries, and electric cars.

“These are really the three legs of the stool for a sustainable energy future,” Musk said. “Solar power going to a stationary battery pack, so you have power at night, and then charging an electric vehicle. You can scale that to all the world’s demand.”

Tesla opened up its online store and began taking $1,000 (€919) deposits for two of four options unveiled in October: a smooth black glass, and textured-glass roof tiles. From most viewing angles, the slick shingles look like standard roof materials, but they allow light to pass through from above on to a solar cell embedded beneath the tempered surface. The first installations will begin in the US in June, although orders are being accepted from countries around the world for 2018.

The cost of Tesla’s solar roof is critical for determining whether it will be a niche product for the wealthy or the key to unlocking a residential solar market that has been slowing in the US. The pricing unveiled was less than many analysts were expecting, including at Bloomberg New Energy Finance and Consumer Reports. When taking into account the energy savings and lifetime cost of ownership (Tesla guarantees it will outlast your home) it’s an affordable option in many areas of the country.

“The pricing is better than I expected, better than everyone expected,” said Hugh Bromley, a solar analyst at Bloomberg New Energy Finance, who had been sceptical about the potential market impact of the new product. Tesla’s all-in cost for active solar tiles is about $42 (€39) per square foot, “significantly below” Bloomberg’s prior estimate of $68 per square foot, Bromley said. Inactive tiles will cost $11 per square foot, and Tesla says to expect an overall average of roughly $22 per square foot.

Tesla’s solar shingles may open doors to wealthy American suburbs, where aesthetics matter and visible solar panels are sometimes prohibited. But they’re not yet for everyone. The solar roof still comes with a considerable upfront price tag. Replacing the roof of a 2,000sq ft home in New York state with 40 per cent coverage of active solar tiles and battery back-up for night-time use would cost about $50,000 after federal tax credits. It would pay for itself with $64,000 of energy produced over 30 years, according to Tesla’s website calculator, but that requires a bigger mortgage and some long-term planning.

In this case a Tesla solar roof is not only more expensive upfront than a traditional roof – contradicting a claim Musk made last year – but it’s potentially more expensive upfront than a traditional roof with solar panels on top, too. That’s because a Tesla solar roof may require more square feet of active solar generation to satisfy the same energy needs as traditional solar panels. Even though the Panasonic solar cells Tesla uses are some of the best in the industry, they must be spaced farther apart than on traditional panels to account for the edges of each shingle, Bromley said. Tesla didn’t disclose the electricity output per square foot or the price per watt of power capacity.

All told, Bromley figured, a traditional solar set-up might be 30 per cent cheaper than the Tesla roof. But Tesla’s will look better and come with a lifetime warranty, whereas normal roofs are typically replaced every few decades. “A 30 per cent premium could well be acceptable,” Bromley said, especially for eager customers like Tesla’s car buyers who are willing to pay $35,000 for a base version of its upcoming Model 3.

Tesla has been adopting an Apple Store strategy for solar power since acquiring SolarCity last year for $2 billion. The idea is to cut down on SolarCity’s high costs of identifying new customers, by attracting them passively through its upscale auto stores in shopping malls and other high-traffic locations. Initial trials found the new strategy was 50-100 per cent more effective than at the best non-Tesla locations selling SolarCity products. Tesla has already halted SolarCity’s door-to-door sales of solar panels, and over the next six months more than 70 stores will be staffed for solar sales.

Rolling out from US

Production will begin at Tesla’s Fremont solar plant in California and then shift this summer to its new factory in Buffalo, New York, with additional investments from Tesla’s partner, Panasonic. Musk said initial sales will be limited by manufacturing capacity. As production ramps up into 2018, sales will begin in the UK, Australia, and other locations, along with the introduction of sculpted terracotta and slate versions of the solar roof.

The tempered glass in Tesla’s tiles is designed to conform to the toughest durability standards for both roofs and solar products, according to Tesla. The roof itself is guaranteed to outlast your home, while the power production of the solar cells is covered under a 30-year warranty, according to the company’s website. Glass, as Musk likes to point out, has a “quasi-infinite” lifetime, although the underlying solar cell will degrade over time.

The basic premise of Tesla’s strategy is to make solar ownership more attractive and affordable by eliminating the redundancy of installing both a roof and solar panels. Tesla will manage the entire process of solar roof installation, including removal of existing roofs, design, permits, installation and maintenance. The company estimates that each installation will take about a week.

“What is the future that we should have?” Musk asked on a call with reporters. “What do we think the world should look like?”In the future, he declares, every rooftop should be beautiful, and they all should produce electricity. The pricing must come down further to make that vision a reality. But it’s not so far off, and the price of both batteries and solar cells continues to plummet as those industries scale up globally. If these new solar roof prices are simply Tesla’s opening bid to its early adopters, glass solar shingles may indeed be the asphalt of tomorrow.
– (Bloomberg)