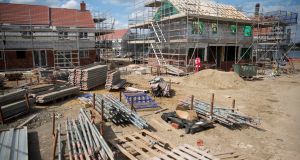 The number of new homes built in the State last year was just 2,076, a fraction of the Government’s 15,000 estimate, according to new figures. Photograph: Reuters/Neil Hall

The number of new homes built in the State last year was just 2,076, a fraction of the Government’s 15,000 estimate, according to new figures obtained under the Freedom of Information.

Taken from the Building Control Management System, which is widely acknowledged as the most reliable construction database, the figures cast further doubt on the Government’s estimate of homebuilding rates in the economy.

They show that, when one-off homes are excluded, just 848 estate houses and apartments were completed in 2016 compared to an official Department of Housing estimate of 8,729.

In Dublin city, the most populous part in the State, just 68 scheme homes and apartments were completed last year.

The figures for other local authorities were also well below official estimates; Fingal (121), Dún Laoghaire-Rathdown (78), South Dublin (69) and Cork City (21).

In three local authorities, Longford, Leitrim and Roscommon, there were no housing completions recorded at all in 2016, while a further eight counties recorded fewer than 10 completions.

The figures stand in stark contrast to the Department of Housing’s official housing completion figure for 2016 of 14,932.

The discrepancy stems from the department’s use of ESB metering data as a proxy to count new builds. Electricity connections can be triggered by work to existing buildings or by formerly vacant units coming back on stream.

The official figures are also likely to have been inflated by the finishing out of so-called ghost estates built during the boom.

Dublin architect Mel Reynolds said the Government’s housing targets, contained in its Rebuilding Ireland strategy, are based on new-build levels that were “fictional”.

He said the remarkably low output figure for scheme homes and apartments also raised questions about the Government’s new Help-to-Buy scheme, which has been blamed for fuelling further inflation in the market.

The Department of Housing has repeatedly defended its use of the 14,932 completion figure, suggesting electricity connections have been used as a proxy for completions since the 1970s, as developers would not connect a property to the grid until it is ready for sale.

It also claims the Building Control Management System database is not an accurate measure of homebuilding activity as it was only established in 2014 and may fail to capture projects commenced prior to that.

Last week, Minister for Housing Simon Coveney said he hoped the level housing supply could be accelerated to 25,000 units a year by the end of next year. However, he indicated the State may need to build 35,000 units before demand in the market can be met.

1 State may face €1bn in compensation in Covid-19 case, Press Up claims
2 How I managed to cut my mobile phone bill by at least a half
3 Lahinch Golf Club runs out of its own cash after €3m Covid-19 hit
4 Fiona Reddan: Who’s afraid of Revolut? Not AIB and BOI it seems
5 ECB ‘should wipe Covid crisis debt’ to help nations recover
6 Is Coveney the right man to lead Greencore out of Covid-19 crisis?
7 Salesforce in talks to buy Slack in huge cloud software deal
8 Workhuman predicts double-digit revenue growth for 2020
9 Ireland must beware as digital tax reform enters critical phase
10 Son putting elderly dad under pressure to sign over land
Real news has value SUBSCRIBE