About 30,000 ghost-estate homes have entered housing stock in past six years 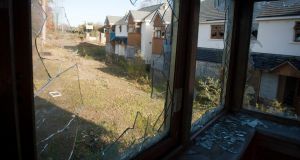 The overhang of partially completed homes from the crash is now estimated to be 2,838, down from a high of about 33,000 in 2010, according to official Department of Housing data.

About 30,388 of these so-called ghost estate units have been brought back into the State’s housing stock over the past six years, an average of 5,065 per year.

The figures, comprising complete and vacant units and near-complete units, were contained in a recent department report on unfinished housing developments.

While these units have buttressed supply in the market, they have also skewed the Government’s house-completion numbers, providing what critics say is a misleading picture of homebuilding rates in the economy.

The problem stems from the Government’s use of ESB metering data as a proxy to count new builds.

Electricity connections can be triggered by these formerly vacant units coming back on stream, effectively leading to double counting in the Government’s numbers.

Either way, with fewer than 3,000 of these units left from the crash, it appears the anomaly will soon be washed through the system.

Minister for Housing Simon Coveney is targeting a residential building rate of about 25,000 units a year by the end of next year.

However, he has acknowledged the State probably needs to build 35,000 a year to meet the current level of demand.

Orla Hegarty, course director at the school of architecture in UCD, said the Government’s targets could be hit by capacity constraints, particularly if the supply figures are being inflated by legacy schemes.

“But if we’re only building a fraction of that and we’re trying to get to 25,000, who is going to build them?”

Ms Hegarty said construction completely collapsed after the crash, losing 71 per cent of its capacity “and this has been slow to come back”.

A decade ago, there were 270,000 workers employed in the construction industry here, now there are fewer than 120,000 and many are involved in the commercial sector.

“A shortage of skilled workers is the single biggest challenge for the construction sector. Every additional 10,000 new-build homes needs an extra 20,000 skilled workers and this is in addition to the wider construction industry demand for 80,000-100,000 workers by 2020,” Ms Hegarty said.

“Given that we’re nearly at full employment, we’re talking about workers coming in to do this, who will all have to live somewhere.”