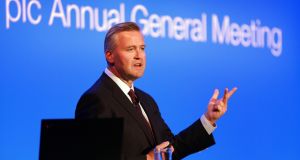 Albert Manifold, the chief executive of CRH whose total pay package hit €10 million last year, brushed off concerns over levels of executive pay from some shareholders following its annual general meeting in Dublin on Thursday.

“When shareholders do very well, I do very well,” said Mr Manifold, who pointed to the performance of the business last year when it recorded a 69 per cent increase in earnings per share.

About 18 per cent of shareholders voted against the directors’ remuneration report in a non-binding vote at the agm, down significantly from the 40 per cent who revolted last year when a new pay scheme was brought in.

A shareholder who had travelled from Germany, who identified himself as Robert, queried directors about the levels of executive pay, which he said was “a little bit outrageous” when compared to the increases in dividends.

CRH paid a final dividend per share of 65 cent, up 4 per cent.

An Irish-based shareholder who identified himself by his surname Walsh also asked the directors what provisions existed to claw back executive pay in future if the board’s “confidence exceeds its competence”.

Nicky Hartery, the chairman, said bonus clawback provisions were in place and he reminded the shareholder that “over the last three years our share price is up 80 per cent”.

Speaking to reporters afterwards, Mr Manifold said “85 per cent” of his remuneration was performance-based and “the business has done very well”.

Overall the board received a relatively warm reception from shareholders who attended the agm. The company’s earnings grew more than 40 per cent to more than €3 billion, with a third of this due to acquisitions made following a strategic review initiated in recent years by Mr Manifold.

The chief executive said CRH was entering a “new phase” of growth and acquisitions. “Over the next 24-36 months we will see CRH step on with further deals. We will broaden out our products. But developing markets will not be a focus.”

CRH has invested about 10 per cent of its net asset base in developing markets, but Mr Manifold said this was “enough” for the company for now.

The company reported that its cement unit in the Philippines had come under pressure from cheaper imports.

He also said CRH, which has major operations in the US, had not been in contact with officials from US president Donald Trump’s administration over the president’s plans to fund infrastructure investment. It is expected that a US infrastructure programme would boost CRH.

“We judge people in terms of when the dollars are available,” said Mr Manifold.