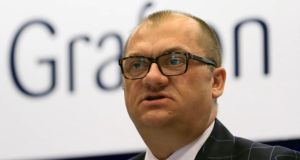 Builders merchanting company Grafton Group’s chief executive, Gavin Slark, has expressed confidence that the UK home repair and maintenance industry will be able to avoid a “significant deterioration” even as Brexit has given rise to “a degree of uncertainty” in its main market.

“I don’t believe that /[BREXIT/] is going to fundamentally shift the UK market,” Mr Slark told The Irish Times after the group’s annual general meeting in Dublin on Tuesday. “The UK is a mature economy. So I do still see the UK as a really important part of our business going forward.”

The comments came after the London-listed group posted a trading update, which said that sales for the first four months of the year rose 7.7 per cent, though it said it remains “more cautious” about the prospects for the its largest market in the UK than its Irish or Dutch businesses.

Shares in Grafton Group have risen more than 35 per cent so far this year, outperforming listed peers in the UK, to value the company at £1.83 billion (€2.2 billion). The UK accounts for more than two-thirds of the group’s revenues.

“In our view, the group’s increasingly differentiated position in the UK market, alongside its unique - and envied - exposure to the fast-recovering Ireland and Netherlands markets set this story apart from that of its peers,” said Davy analyst Michael Mitchell in a note to clients.

On a like-for-like basis, UK merchanting sales rose 4.8 per cent as it benefited from restructuring last year, which saw it close 47 branches across its plumbing, heating and contracts businesses in the market last year, at a cost of £19.7 million.

The UK’s trade-only Selco Builders Warehouse business, which is geared towards small-jobbing builders, “experienced good demand in its established network,” Grafton said in a trading statement ahead of its annual general meeting in Dublin on Tuesday, adding that a 50th Selco branch would open this month and that it remained on track to add at least 10 new locations this year.

However, sales in Belgium dipped 3.4 per cent. Mr Slark that the Belgian market is “difficult” but that it should see an improvement in profits this year, even as sales decline, as it moves its focus to a higher margin business supplying smaller builders who collect products from a “high volume, low margin delivered” offering.

In the retailing division, which makes up 6 per cent of group revenue, the Woodie’s business “generated strong revenue growth”, albeit with good demand for seasonal outdoor products in April measures against “a markedly weaker performance” for the same month last year.

Meanwhile, Mr Slark said that the company continues to look for bolt-on acquisitions, mainly in the Netherlands and the UK.

“But if we find the appropriate business, then we’ll look at a different geographic market,” he said, adding that it the company wasn’t looking at “anything specific” outside its existing main markets.

Noting that Grafton Group’s shares have rallied by more than 60 per cent from their lows following the UK Brexit referendum last June, Merrion Capital analyst Darren McKinley said that the company’s share price “is now up with current events and that future performance will depend on the outlook in the UK”.