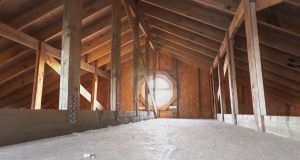 A leading housing expert has criticised the Government’s “misleading” figures for the number of new homes built last year and said that a different method for counting new-builds must be used.

The criticism from DIT housing studies lecturer Dr Lorcan Sirr follows an Irish Times report on documents which show that just in excess of 2,000 new homes were constructed in the State last year, far below the Department of Housing’s official figure of nearly 15,000.

The large discrepancy is due to the department’s method of counting new-builds, which uses the number of new electricity connections to properties in a year as a proxy for the number of homes built.

However, this system is prone to error, as homes built during the housing boom last decade that have only just been connected to the electricity grid are counted as new-builds.

The Government’s figures contrast with those from the Building Control Management System, which only counted properties that were actually constructed in 2016.

The Building Control Management System found that the number of new houses and apartments built last year was just 2,076.

Speaking to RTÉ News at One on Monday, Dr Sirr said the Building Control Management System figures cast doubt on the Government’s plan to introduce 25,000 new homes to the market every year.

“It’s not reliable, but this is the method they have used for counting houses for years, and the argument is, ‘We’ve used it for years and we’re going to continue to use it’.

“The counter-argument to that is we used to use leeches in medicine but then we moved on,” he said.

“Not alone is it very misleading, [but] those become our official statistics which get passed up the line to the OECD and get used by the UN and the EU and Eurostat and banks, which plan their business along these lines,” he added.

Dr Sirr said it was also of concern that just 848 of the 2,076 homes built in 2016 were scheme houses and apartments, meaning the remainder were built privately and will not enter the market.

While Department of Housing data indicates that more than 900 scheme homes were completed in Dublin city last year, the Building Control Management System figure is just 68.

Similarly, the true figure for scheme homes built in Cork city last year is said to be 21, rather than the 287 recorded in Government statistics.

Dr Sirr also called for politicians to renew focus on the issue of a vacant property tax, so that some of the 183,000 empty homes across the country could be brought on-stream and made ready for sale or rent.

1 In this strangest of recessions, what happens next for Ireland?
2 Should I switch bank now with Ulster Bank at risk of closing?
3 Estée Lauder staff at Dublin airport plan further strike action
4 Michael O’Leary is the boss you want to lead an airline out of crisis
5 Best Covid-19 ‘influencers’ will avoid hectoring
6 Dunnes Stores set to enter grocery delivery market
7 Ireland’s Covid-19 economy in five graphs
8 Plan for 80 hydrogen fuel stations for Ireland by 2030
9 So you want to invest in the stock market: what will it cost?
10 Ireland is in danger of losing the woods for the trees on emissions reduction
Real news has value SUBSCRIBE