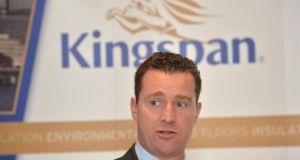 Kingspan chief executive Gene Murtagh: key UK market has become “a little softer than at the turn of the year”.

Kingspan, whose shares have rallied 75 per cent from their post-Brexit lows, has seen its UK order backlog weaken in recent weeks and its profit margins come under pressure as it grapples with a surge in the cost of a key chemical ingredient used to make insulation products.

Shares in the Cavan-based group, whose market value reached an all-time high of €5.68 billion this week, fell 1.4 per cent on Thursday.

The comments were contained in a trading statement, issued before its annual general meeting (agm), which also showed that group sales surged 24 per cent to €831.2 million in the first three months of the year, compared with the same period in 2016.

The company said its mainland European markets continued to show signs of recovery with “decent” sales volumes overall in the first quarter, while business in the US was a “a little more encouraging than conditions experienced at the end of last year”.

While the UK, which accounts for more than a quarter of group sales, “remains solid overall,” Kingspan, led by chief executive Gene Murtagh, said this key market it has become “a little softer than at the turn of the year”. Last year, the group had defied market expectations following the Brexit referendum to post a 14 per cent full-year surge in revenues in the UK.

Speaking to reporters after the annual general meeting, Mr Murtagh said some customers are now pushing out decisions to place orders with the company “towards the latter end of the year”.

Meanwhile, he said that cost inflation – driven by a global shortages of mthylene diphenyl disocyante (MDI), which is used to make polyurethanes used in insulation – will squeeze the company’s margins in the second quarter. This will result in first-half profits growing at a slower rate than sales.

Kingspan’s first-quarter sales rose by 14 per cent when the positive impact of acquisitions were stripped out. Analysts at Investec in Dublin said the growth rate beat their 8 per cent estimate, while Davy said this figure was “far ahead or our organic revenue growth estimate of 6 per cent for the year overall”.

The agm saw more than 25 per cent of shareholders that vote by proxy against a new share bonus plan. The scheme, which replaces a programme that draws to an end next year, will see executives half of stock awards vest if the company delivers on minimum targets set for earnings per share and total shareholder return.

Institutional Shareholder Services, a shareholder advisory firm, had recommended that investors reject the plan on the basis that most companies now only pay out now more than 25 per cent of awards on meeting minimum – or threshold – targets.