LafargeHolcim chief to step down over Syria controversy 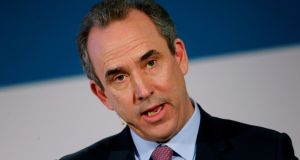 Eric Olsen: terms of his departure were still being discussed on Sunday, according to people close to the company. Photograph: Arnd Wiegmann/Reuters

LafargeHolcim’s chief executive is set to step down on Monday following an internal investigation into a plant the Swiss-French cement company operated in Syria until September 2014.

Eric Olsen’s departure would make him the highest-profile casualty of the controversy surrounding a Lafarge cement plant that the company continued operating as Syria descended into civil war. Human rights groups have alleged the company helped finance terrorism.

Terms of his departure were still being discussed on Sunday, according to people close to the company. LafargeHolcim did not comment.

LafargeHolcim said in November that it “completely rejects the concept of financing of designated terrorist groups”.

Mr Olsen was not directly responsible for the operations in Syria, but while the plant was running, he was a senior manager in charge of operations at Lafarge. The French group merged with Switzerland’s Holcim to form LafargeHolcim in a €41 billion deal in 2015.

His expected exit, which was first reported by France’s Le Figaro, would be another blow for the cement company. Last year its chairman stepped down and the group is under pressure to deliver an ambitious integration programme in weak global markets following the 2015 merger.

Mr Olsen’s role is set to be filled temporarily until a longer-term successor is found.

LafargeHolcim admitted in March that “unacceptable” measures had been taken to keep its Jalabiya plant in Syria running as the civil war intensified in 2013 until it was evacuated in September 2014. Those responsible for the plant had made “significant errors of judgment”.