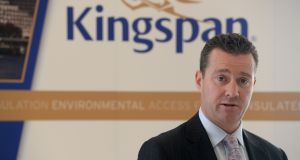 Investors in Kingspan should vote against a share bonus programme being proposed by the insulation manufacturer, as it will be too easy for executives to get hold of stock under the plan, according to a leading shareholder advisory firm.

As Cavan-based Kingspan’s 2008 performance share programme (PSP) draws to an end next year, the group is planning to replace it with a similar plan where half of stock awards will vest if the company delivers on minimum targets set for earnings per share and total shareholder returns.

Institutional Shareholder Services (ISS), an influential firm that advises major investors on corporate governance matters ahead of annual general meetings (agm), said in a report on Kingspan that most companies now only pay out no more than 25 per cent of awards on meeting minimum – or threshold – targets.

The threshold target for earnings per share at Kingspan set at the rate of inflation rate plus 5 per cent. Meanwhile, the target for total shareholder returns is set at the median rate among a selection of 14 other companies, ranging from CRH to Austrian brick-maker, Wienerberger.

“Upon engagement, the company went to great lengths to explain that ‘the current PSP scheme is used to incentivise and reward over 300 managers and key employees in 27 countries across the group, as well as executive directors’,” ISS said.

A spokesman for Kingspan, where chief executive Gene Murtagh’s remuneration rose more than 9 per cent last year to €1.915 million, declined to comment when contacted by The Irish Times on Friday.

Meanwhile, another advisory firm, Glass Lewis, said it is supportive of the new PSP, saying it “provides an appropriate incentive structure, with reasonable limits, performance metrics and safeguards”.

However, Glass Lewis has called on shareholders to vote against the re-election of two executive members of the board at the agm, Gilbert McCarthy and Russell Shiels, as it has concluded that less than half of the board members can be classified as independent.