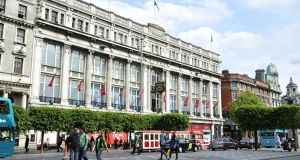 US investment firm Quadrant Real Estate Advisors has lent more than €500 million for Irish commercial property projects since entering the market three years ago to help fund the purchase of Clerys department store in Dublin, and plans to originate a similar amount over the next two years.

Kurt Wright, chief executive of Atlanta-based Quadrant, told The Irish Times his firm, which to date has focused on financing land acquisition and speculative construction of office, hotel and mixed-use properties in Dublin and Cork, sees continued demand for Irish office space in the coming years, even as an expected influx of jobs from London to Dublin has been less than many had predicted.

“We have pulled back in lending activity in the UK in the office sector until Brexit has become more settled down, but on the other hand, we never expected Brexit to give a big boost to Ireland,” said Mr Wright. “You simply aren’t oversupplied with office in Dublin.”

The US firm subsequently gave finance to the new owners of Clerys to buy a portfolio of property adjacent to the former department store, which will feature in a broader redevelopment of the area.

Over the past two years, Quadrant has lent against projects such as the construction of an office block on Hanover Quay in the south Dublin docklands and 202-bed Starwood Aloft Hotel being developed in the Liberties area of the capital with the backing of businessman Denis O’Brien.

“All the expectations we had in 2015 have been exceeded,” said Mr Wright. “The property market is fundamentally sound and the economy remains deeply robust. The projects we are financing are of the highest calibre.”

Some €50 million of Quadrant’s Irish office development funding to date has originated from the Ireland Strategic Investment Fund. While the firm initially flagged two years ago that it planned to set up a separate Dublin-based fund to mainly target European institutional investors interested in financing Irish commercial property deals, this is set to receive initial investments in the coming months.

Mr Wright said that the difference between the Celtic Tiger years and now is the level of long-term international capital, such as German pension funds, and listed real-estate investment trust money that is currently in Irish commercial property.

Quadrant charges rates in the “high single digits” for Irish commercial real estate loans, according to the executive.