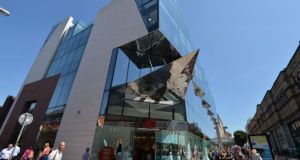 Almost three-quarters of Irish investment activity in the first quarter occurred in the Dublin market, according to property consultants CBRE. Photograph: Alan Betson

Almost €930 million was invested in commercial property in the Republic in the first three months of 2018, according to property consultants CBRE.

This was nearly twice the volume of sales recorded in the first three months of 2017, which was about €475 million.

The figures for this year were boosted by three large transactions of more than €100 million. Almost three-quarters of Irish investment activity in the first quarter occurred in the Dublin market.

However, CBRE said investors were now also exploring good investment opportunities in other cities such as Cork, which commanded 11 per cent of the spend.

Offices accounted for more than half of investment spend in the period, with 14 per cent of the spend accounted for by the emerging build-to-rent/multi-family sector.

“Following 2017, which saw more than €2.5 billion of assets traded in the Irish market, Q1 2018 has seen continued activity in the Irish investment market, with 50 individual transactions with a value of more than €1 million totalling almost €930 million between them signed in the three-month period,” said Marie Hunt, executive director at CBRE Ireland.

Some of these transactions carried over from last year and several were conducted off-market, she said.