Abilene house extending to 3,600sq ft could be developed into up to 67 homes, report says 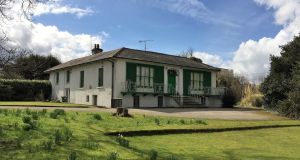 Abilene was bought in 1941 by Dermot Findlater, who ran the thriving Findlater grocery and wine business in Dublin’s O’Connell Street for decades

After 77 years in the ownership of the Findlater family, a large period house and nearly three acres off Newtownpark Avenue in Blackrock, Co Dublin looks set to be of particular interest to many leading house developers when it goes for sale from Wednesday by private treaty.

Agent Cushman & Wakefield is guiding €7 million for Abilene, a protected structure in need of modernisation, which sits on an elevated site of 1.19 hectares (2.94 acres) within 150m of the Stillorgan Road.

The two-storey house extends to 335sq m (3,602sq ft) and served as a farmhouse on the Proby Estate after being built in 1790. Several outbuildings were added over the years and the main house was extended in the 1950s.

Abilene was bought in 1941 by Dermot Findlater, who ran the thriving Findlater grocery and wine business in Dublin’s O’Connell Street for decades. He and his wife, Dorothea, had six children. She continued to reside at the fashionable home following Dermot’s death in 1962. She died there last November as Ireland’s oldest citizen, just short of 108 years.

Cushman & Wakefield is confident of an early sale of the property because of its greatly enhanced development value as a result of the economic recovery and the acute shortage of new homes in areas such Blackrock, Foxrock and Mount Merrion.

To facilitate an early sale, O’Mahony Pike Architects was engaged to prepare a detailed feasibility study for a high-quality residential scheme.

Its findings suggest several development options for 43 to 67 houses and apartments under the Dún Laoghaire-Rathdown County Development Plan.

To the west of the site is a high-density four-storey apartment development known as Galloping Green. The northern boundary is marked by a range of two-storey detached houses.

In the event of the Abilene site being chosen for blocks of apartments, residents of the upper floors would have clear views of Dublin Bay and the Dublin Mountains.

The site has 50m of frontage on to Newtownpark Avenue and is a few minutes’ walk to the N11 Stillorgan Road, which has a quality bus corridor.

The future development site is also within easy commuting distance of a range of shopping centres, including Stillorgan, Frascati, Blackrock and Cornelscourt.

The sale of Abilene is being handled by Donal Kellegher and John Donegan of Cushman & Wakefield.