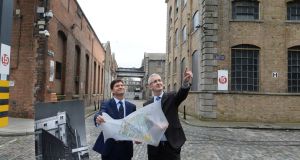 Property players Harcourt, Hines, Quintain, Oxley and U&I are vying for a place on a shortlist to develop part of the Guinness brewery as a new urban centre.

Diageo’s call for partners from the property industry to develop the site jointly attracted bids from 16 prospective suitors. The drinks giant has since whittled these down to six. A further round of bids is due at the end of this month, from which it is expected that Diageo will draw up a shortlist of three potential partners.

US-based Hines is already involved in building a new suburb at Cherrywood in south Dublin and redeveloping the old Central Bank office on Dame Street in the capital’s centre.

London-listed U&I is building a five-storey office block on Dublin’s Burlington Road in partnership with local developers Johnny Ronan and Paddy McKillen. It also owns Robswall apartments in Malahide to the north of the city.

US investment fund Lone Star owns Quintain, the London-based developer of Wembley Park, which is building 5,000 homes for rent in the English capital’s western suburbs.

Oxley has investments in Europe and in southeast Asian countries such as China, India, Malaysia and Myanmar. The company is building offices in partnership with Sean Mulryan’s Ballymore on the north bank of the Liffey in Dublin.

The Singaporean firm’s links with Ballymore sparked some speculation that the Irish developer may also join forces with it on the Guinness project, should its bid succeed.

Harcourt Developments is an Irish property company with interests here, in Britain and the Caribbean. It is best known as the builder of Belfast’s Titanic Quarter.

None of the companies would comment when contacted. A Diageo spokesman said that the drinksmaker was continuing with the process of finding a partner, which it originally predicted would take a year to 18 months.

Diageo announced the redevelopment plan last October, which indicates that it could take six months to a year before the company chooses a partner to redevelop the 12-acre site.

The group plans to keep ownership of a number of key buildings in the quarter, including Arthur Guinness’s home and St James’s Gate itself.

Country manager Oliver Loomes explained that Diageo would not know how much the redevelopment would cost until it had signed up a partner. Diageo said last October it hopes to hire people from the local area to work on the development, as the company did when it built its €169 million Brewhouse 4 brewery which opened in 2014.