Decline largely due to projects reaching completion in the south docklands 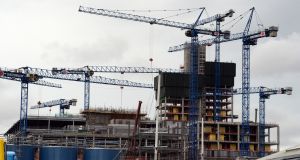 Cranes over the centre of Dublin. Photograph: Cyril Byrne

There were 71 construction cranes visible over the centre of Dublin on April 1st from the seventh floor of The Irish Times building on Tara Street.

This is down seven on the previous month’s total and a drop of nine on the 80 recorded on December 1st, 2017 – the highest total yet registered by the Irish Times Crane Count. However, this month’s total is still more than double the 31 recorded on February 1st, 2016, when the newspaper’s crane survey was launched.

Nevertheless, it’s becoming increasingly clear that a lot of construction projects – particularly in the south docklands – are approaching completion and the quantity of new schemes entering the development phase is falling off, as was predicted by a number of commentators at the end of last year.

There were 53 cranes visible on the southside (down seven) and 18 on the northside.

Meanwhile, site clearance work has just started on what will be Dublin’s tallest office block – the Exo – in front of what was the Point Depot. This €80 million Nama-funded scheme is on the site of Harry Crosbie’s “Watchtower”, a Celtic Tiger era project that was to have reached 120m tall. Zoning on the site allows for a 22-storey (about 88m) building but the Exo will top out at 73m (17 storeys).

This will be the fifth “tower” currently under construction in Dublin city centre. Across the Liffey, the 79m apartment block at the Capital Dock project is nearing completion while the three towers (53m, 49m and 48m) in the Bolands Quay scheme at Grand Canal Dock are beginning to take shape.

It might be some time before other towers are built in the city centre given Johnny Ronan’s planning experience for an 88m structure beside Tara Street station. This project was recently rejected by An Bord Pleanála despite its own senior inspector giving it the green light.

So, for now, Dublin’s tallest building will rise to 79m at Capital Dock – on the site of the so-called U2 Tower which was envisaged rising to 130m during the boom years. To describe it as a “tower” is debatable, especially given that “tall” buildings elsewhere are considerably higher. For example, London’s Gherkin rises to 180m and its Shard to nearly 310m.