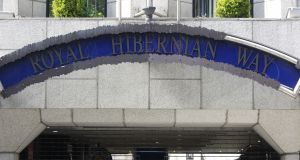 Friends First Life Assurance has secured planning permission for a major refurbishment of the Royal Hibernian Way in Dublin, despite an objection by a leading financial services firm.

An Bord Pleanála has upheld the decision of Dublin City Council to approve the final phase of plans by Friends First to upgrade the shopping arcade between Dawson Street and Duke Lane, which contains offices on the upper floors.

The granting of planning permission had been appealed by Davy, which voiced concern that the proposed development would have an adverse impact on its headquarters in the complex, where over 550 staff are based.

Friends First had submitted plans for a new feature entrance to the Royal Hibernian Way from Duke Lane and a two-storey extension and the internal refurbishment of Block C – one of the centre’s main buildings. It also sought permission for a horizontal extension to connect Block C with two other buildings in the complex.

Friends First has owned 50 per cent of the shopping arcade since it opened in the mid-1980s on the site of the former Royal Hibernian Hotel and acquired the remaining 50 per cent in 2016.

Work on the upgrade and refurbishment of the existing ground-floor retail units, comprising 25 shops and restaurants, which was approved under a separate planning application, are nearing completion.

The latest phase of the development will more than double the size of office floor space in Block C to around 1,656sq m.

Consultants acting for Davy complained that the proposed changes would have an overbearing effect on other buildings in the complex and would result in a loss of natural daylight to their client’s headquarters and the ability to use an existing roof terrace.

Davy has been based in Royal Hibernian Way since 1987 and has a lease on its headquarters up to 2037.

It claimed the proposed building works would result in “a dramatic reduction of workplace amenity” currently enjoyed by Davy’s staff and would render some office space unusable due to a loss of privacy and confidentiality.

Davy also expressed concern about the impact of a prolonged construction phase on Davy’s daily operations in relation to noise and health and safety, and claimed it had already experienced significant disruption during earlier refurbishment work.

In response, Friends First said that, as the owner of the building that housed Davy’s offices, it had a material interest in ensuring it was not negatively affected by the development.

The company said Davy’s claims about a loss of privacy and confidentiality were exaggerated.

An inspector with An Bord Pleanála said the discrete location and modest scale of the development would result in “a moderate magnitude of change that will have a moderately positive impact on the local urban landscape character”.

The board said that the proposed development, subject to compliance with a number of planning conditions, would provide “a vibrant form of development” that would not seriously injure visual or other amenities of the area or adjoining properties.