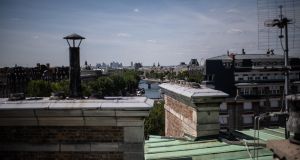 Paris from on high. The narrative of increasing density seldom includes cities such as Barcelona or Paris as examples of densified cities without the dominance of high rise. Photograph: Martin Bureau/AFP via Getty Images

Our cities, and in particular Dublin, are increasingly the engine room for the economy. They attract more and more people to live, to work or to be educated. The trend is driven to a large extent by tech and internet companies that were barely known 15 years ago. While we may plan for more regional and balanced development, it would be a mistake to ignore the increasing development of our cities. It would be short-sighted and constrain economic growth.

In parts of the world, population movement and increased urbanisation is addressed by creating new cities or even allowing existing cities to sprawl further. In Ireland neither of these options are practical or desirable and the preferred option must be to make the most of our existing city footprints. With better use of brownfield or underdeveloped sites (much of it owned by the State) there are smart ways to increase population density while at the same time improving the quality of people’s lives. The opportunity is presented to improve infrastructure and connectivity, to design better buildings and to use existing amenities and green areas wisely.

Good density enables more of us to live, work, eat, sleep and play all within proximity of each other. It reduces dependency on cars, makes public transport more efficient and gives back the one commodity we are all short of – time.

Good density is key to sustaining our cities, quality of life, the economy and the environment. There is broad acceptance for the need to densify and although far from perfect, steps are being taken to facilitate more people living and working in cities. Proponents of increasing density are often viewed with suspicion and distrust as if plotting to turn our low-rise cities into Irish versions of Manhattan or the City of London. The concept is often misunderstood and the narrative seldom includes cities such as Barcelona or Paris as examples of densified cities without the dominance of high rise. In the Dublin context, few recognise that areas such as Rathmines and Ranelagh in Dublin 6 are relatively “dense” at 45 homes per hectare in comparison to 27 homes per hectare in suburban Dublin.

Dublin and Cork are capable of accommodating pockets of high-rise, high-quality and socially-inclusive developments that can enhance the cityscape and the quality of living experience. Docklands and well-connected interchange areas situated away from the city centre are suited to the creation of vibrant well-designed, mixed-tenure communities. However, more broadly, increased population density can be achieved at the level of seven to nine storeys with the benefit of well-managed amenities and green areas.

The success of a city densification strategy requires the collaboration of all city stakeholders and the formulation of a vision for the type of city its citizens wish to live in. Once agreed, the vision and strategy become the guiding framework for planning and design decisions as the long-term development of the city takes shape. The Dublin City Development Plan 2016-2022 is a good and useful example of such a statement of intent; however there is a risk that it becomes a statement at a point in time rather than a “live” document to be updated and reviewed. After all, people’s needs and patterns of living change over time. Local area plans and revisions by central government provide useful updates and amendments over the lifetime of a city development plan.

Good density provides for the mixed-use of land. It includes a balance of residential, commercial, retail and amenity or leisure uses. Buildings are used by different groups and are activated throughout the day and into the evening. Residents can live, work, shop, eat and play within 15-20 minutes of each other reducing unnecessary travel time and expense.

Good density is cohesive and inclusive. More than economic needs it enhances the living experience of city residents and supports quality living regardless of income and social status. It is designed to benefit all city residents and communities.

While legacy “density” projects of the ‘60s and ‘70s are sometimes referenced as evidence of the negative impact of density, much has changed. Though it need not mean high rise, the modern definition of good density does mean high-quality design. This includes the design of buildings, the public realm and a focus on placemaking.

In addition to quality design, modern methods of construction deliver higher-density buildings (including homes) that have less negative impact on the environment. They use less energy, save water and make better use of publicly-funded transport.

Increasing density or more accurately increasing the population density of our cities is a good thing and should be promoted. It is not a panacea. However, properly executed with attention to quality of design, it will deliver a city that is not only more pleasurable to live in but is more socially and environmentally sustainable for future generations.