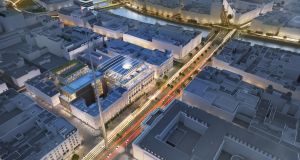 Clerys Quarter: due for completion in the final quarter of 2020

WeWork has pulled out of two further deals for office space in Dublin, and walked away from discussions at a preliminary stage in relation to a third building in the capital.

In the first instance, the Irish Times understands the company will not now be proceeding with an agreement to rent all 8,974sq m (96,595 sq ft) of office space at the Clerys Quarter.

Located on the site of the former Clerys department store on O’Connell Street, the scheme which is under development currently by Europa Capital and local shareholders and partners, Core Capital and Paddy McKillen jnr’s Oakmount, is due for completion in the final quarter of 2020. Although a spokeswoman for Oakmount declined to comment on the matter when contacted by the Irish Times, it is understood the developer’s agreement with WeWork had been non-binding, and as such, the office space at Clerys Quarter remains available to other occupiers.

Separately, WeWork is also understood to have pulled out of a deal for office space at the Forum Building in Dublin’s IFSC. The company had up until recently been in talks with Hibernia Reit to take all 47,000sq ft at the property. Spokespersons for both WeWork and Hibernia Reit declined to comment on the matter.

Only two weeks ago, WeWork withdrew from talks with Hibernia Reit in relation to space at another of its Dublin docklands office buildings. According to Bloomberg’s report of the matter, the negotiations for Central Quay fell apart because of specific factors about the building.

Elsewhere in the city, the Irish Times understands that a potential plan by WeWork to rent a second block at Ballymore and Oxley’s Dublin Landings scheme will not proceed. A source familiar with the matter said that discussions between the parties in relation to Block 3 had ended at a “preliminary” stage. The building is now understood to be the subject of enquiries from several other potential occupiers.

Contacted for comment on its decision to withdraw from the Clerys Quarter and Forum Building deals, a spokesperson for WeWork said: “We’re committed to Dublin and excited to continue growing such a strong community here in the city. We consider many buildings in the markets in which we’re located but of course may not proceed with all of them. We look forward to continuing to work with the Dublin real estate community to bring great office space, design and amenities to market.”