WeWork set to cut up to 4,000 jobs as part of turnaround plan 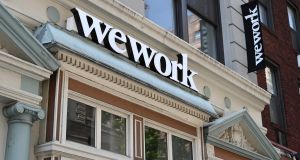 Japan-based SoftBank has taken control of WeWork in a bailout plan that will see the office-sharing startup’s co-founder Adam Neumann exit the board. Photograph: Timothy A Clary/AFP via Getty Images

Office-sharing startup WeWork is planning to cut as many as 4,000 jobs as a part of a turnaround plan put in place by top shareholder Japan’s SoftBank Group after it took control of the company this week, the Financial Times reported on Wednesday.

The job cut will amount to just under a third of WeWork’s global workforce, and about 1,000 of the cuts will hit employees such as janitorial staff, the report said, citing people with direct knowledge of the plans. SoftBank agreed to spend more than $10 billion to take over WeWork on Tuesday, giving a near $1.7 billion payoff to the startup’s co-founder Adam Neumann to relinquish control.

SoftBank Group agreed to spend more than $10 billion to take over WeWork on Tuesday, doubling down on an ill-fated investment and giving a near $1.7 billion payoff to the US office-space sharing startup’s co-founder Adam Neumann to relinquish control. The deal represents a stunning reversal of fortune for WeWork as well as its largest shareholder, SoftBank Group Corp , which has committed more than $13 billion in equity to a company that is now valued at just $8 billion.

The bailout comes as SoftBank chief executive Masayoshi Son is seeking to convince investors to participate in the Japanese company’s second mammoth Vision Fund, for which he is seeking to raise $108 billion.

To stem WeWork’s bleeding, SoftBank will need to reverse its widening losses and find a way to make it profitable.

The rescue financing also marks a dramatic fall from grace for Neumann, who as recently as last month was preparing to take WeWork public as CEO after attaining a $47 billion valuation for it in January.

While WeWork employees now face the prospect of thousands of layoffs, Mr Neumann has secured a $685 million side deal with SoftBank to step down from the board of WeWork’s owner, The We Company, according to people familiar with the arrangement. Mr Neumann also has the right to sell $970 million of shares, according to one of the sources, as part of a tender offer in which SoftBank will buy up to $3 billion in WeWork shares from existing investors and employees at a price of $19.19 each. He currently owns a little over a fifth of WeWork, and is expected to retain a stake.

Mr Neumann faced margins calls on his personal borrowings against WeWork’s private stock as a result of the collapse of the company’s valuation. SoftBank has agreed to extend to him a $500 million loan to repay a credit line from JPMorgan Chase & Co , as well as pay him a $185 million fee for a four-year assignment as a consultant to WeWork, one of the sources said.

Mr Neumann had drawn down $395 million on JPMorgan’s credit line, another of the sources added. Under the terms of the deal with SoftBank, he must use the proceeds from selling his stock to first repay the loan extended to him by SoftBank, according to the source. Even though he will give up his board seat, Neumann will get two representatives on WeWork’s board, one of the sources said.

WeWork said in a statement that its board will be expanded and control how Neumann’s shares are voted. Reuters first reported on Monday that Mr Neumann was negotiating stepping down from the board and would serve as an adviser. “The consulting arrangement is mind boggling. It’s terrible governance,” said Nell Minow, vice chair of shareholder advisory firm ValueEdge Advisors. “Why pay the guy who got WeWork into this mess for advice. It’s adding insult to injury and a little more injury too.”

Nevertheless, some WeWork investors said they supported the deal. “Adam is a visionary who has created an impactful company which has transformed the way many people work, live and think. We think he deserved to take some money off the table for his contribution to the company,” said All Blue Capital managing partner Matt Novak. He declined to say how big his firm’s stake in WeWork is. SoftBank said it will provide a $5 billion debt package to WeWork, comprising $1.1 billion in senior secured notes, $2.2 billion in unsecured notes, and a $1.75 billion letter of credit facility.

Ulster Bank CEO tells staff ‘all options’ on future on the table 12:00
Applegreen’s revenues fall by a quarter but hopes for bounce back next year 11:16
Aldi empire wracked by family feud 11:08
Fusion shares soar on news of antigens for Covid-19 tests 11:02
Roche says its drugs reduce ventilator need for Covid patients 10:29