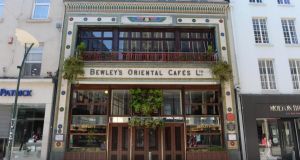 Bewley’s first opened on Grafton Street in 1927. Since then, the cafe has served tens of millions of Dubliners and visitors to the city. Photograph: Dara Mac Dónaill

Developer Johnny Ronan’s Ronan Group Real Estate (RGRE) has said it remains hopeful that Bewley’s will reopen its historic Grafton Street cafe next Monday, notwithstanding its recent announcement of its intention to close its doors permanently.

While a spokeswoman for Bewley’s told The Irish Times that the company was now “fully focused on engaging” in a “sensitive and considerate manner” with those employees affected by the “proposed” closure they declined to comment on the note to customers posted on Bewley’s website stating that the Grafton Street cafe would merely remain “closed until further notice”.

The Covid-19 update adds that it “hopes to see each of you again once this has passed” and directs customers to check the Grafton Street cafe’s Instagram and Facebook pages for further information.

Asked yesterday to clarify Bewley’s intentions in relation to its Grafton Street premises, the company’s spokeswoman said there was “no further information” to add to its statement of May 6th last.

On that occasion, Bewley’s confirmed that it had written to its Grafton Street staff to inform them that it “is likely to be necessary to permanently close the cafe over the coming weeks”. The company added that the “proposed closure would result in the loss of all jobs in the cafe”.

While that statement appeared to sound the death knell for what is arguably the best-known coffee shop in Dublin, the conditional nature of its wording has given rise to hopes within RGRE that the Grafton Street cafe may yet reopen.

The proposed closure of Bewley’s has been blamed on the impact of the Covid-19 pandemic on the economy, which has been in lockdown since March, and the € 1.5 million annual rental cost on the protected structure.

Contacted for comment on the matter, Ronan Group chief executive Rory Williams said: “Restaurant and café businesses across the country are putting in place the final preparations for reopening on June 29th. It remains our hope that Bewley’s Café Grafton Street will be among them. Ronan Group has made contact and tried to engage with Bewley’s and with the Campbell family on more than five separate occasions before and since the shock announcement that the company intended to close the café, without reply.

“We have said consistently since learning of the planned closure through the media on May 6th that we remain open to engaging in meaningful dialogue that could lead to the closure being averted.

“It was not our decision to close the café and it is certainly not our preferred outcome. Nevertheless, if Bewley’s remains closed and if the Campbell family continues to refuse to pay rent, we will be left with no option but to take the necessary steps to protect our position.”

Mr Williams declined to comment when asked to outline the steps the Ronan Group might take to protect its position. Should the company move to secure the premises however, it is understood it would then begin the process of securing a new food operator for the property’s ground floor in conjunction with exploring plans for a boutique hotel on the building’s upper levels.

Bewley’s Oriental Cafes Ltd first opened on Grafton Street in 1927. Since then, the cafe has served tens of millions of Dubliners and visitors to the city over the decades, and the building includes a Harry Clarke stained glass window, distinctive banquettes, 10 open fireplaces and an art deco mosaic tiled facade.

It closed in 2004, reopening the following year after Bewley’s teamed up with entrepreneur Jay Bourke, who opened two restaurants, Café Bar Deli and Mackerel.

Those businesses closed post the crash, with the cafe reverting to the Bewley’s brand. It shut again in early 2016, reopening in November of the following year following a € 12 million head-to-toe refurbishment. More than 600,000 customers pass through the cafe on Grafton Street each year.