Irish commercial property deals slump most in EU amid Covid-19 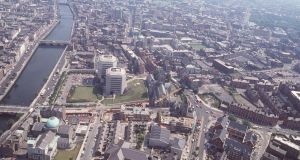 An aerial view of central Dublin.

The value of Irish commercial property deals slumped 79 per cent during the height of Covid-19 restrictions between the middle of March and the end of May, delivering the weakest performance across the European Union, according to BNP Paribas Real Estate (BNPPRE).

Overall property investment fell by 44 per cent across Europe over the same period, with non-EU member Norway faring the worst, posting an 81 per cent slump, according to the consultancy group. Markets went into lockdown mode and governments slashed their economic forecasts as they grappled with the coronavirus shock.

Italy and Spain, initially the epicentres of the virus outbreak across Europe, each saw their level of transactions decline by about 40 per cent – half the Irish rate – while activity fell by 56 per cent in the UK, according to the report.

However, Kenneth Rouse, managing director and head of capital markets at BNPPRE Ireland, said the fall-off in Irish activity needs to be seen against the backdrop of a record level of deal-making in the State last year, driven by overseas investors.

“Covid-19 has undoubtedly affected the market and investor sentiment, although context is important too: 2019 was a record year for investment volumes across Europe, and the strongest on record for Ireland,” Mr Rouse said. “Commercial real estate was on fire, as investors looked to increase allocations into alternative asset classes, including real estate, thanks to high volatility on stock markets and the negligible returns of fixed-income products.”

BNPPRE said that, while property prices are higher than they were a decade ago, the banking system, key to the funding of deals, is more solid than then. In addition, the general economic backdrop “is much less deflationary”, as ultra-low government bond yields make riskier assets more attractive.

Mr Rouse suggested that prime office property would avoid a drop in valuations, saying “very little upward pressure” was expected on rental yields, currently at 4 per cent. Property prices and rental yields are inversely related, meaning that as one goes up, the other falls – assuming here is no movement in rents.

However, Mr Rouse said that there may be “more general upward tensions” in yields in secondary Irish markets.

The outlook for retail property will strongly depend on the location, footfall and vacancy rates of assets as the economy continues to recover. Meanwhile, property used for storage and distribution of goods – known as logistics – has been the “sector du jour” during the Covid-19 crisis in Ireland, as ecommerce burgeoned on the back of movement restrictions.

“We believe that, in the medium to long term, changes in consumer behaviour could now normalise more toward online shopping here,” he said.

The Central Bank warned last week that the influx of overseas money into Irish commercial property in recent years, high levels of debt against these assets, and the possibility of more people working remotely over the long term may conspire to hit real-estate values as the economy navigates the Covid-19 crisis.

A sudden stop or reversal in foreign investor appetite for Irish commercial property could have “adverse consequences” on property prices, it said.