Cantillon: Landlords’ attitude will be key to where the sports retail giant opens next 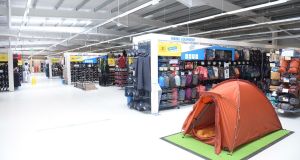 After the past three months, commercial property owners can only guess what happens next. So the sight of a tenant seeking about 3,000sq m of commercial space on the edge of a city or large town could be very welcome indeed.

On that basis, French sports retail giant Decathlon, which opens a 4,000sq m flagship store at Ballymun on Saturday, could look like the answer to many prayers in Galway or Cork, where it could open its next outlet on this island.

Bastien Grandgeorge, chief executive of the chain’s Irish operation, says it could open up to nine stores here eventually and confirms that both cities are candidates for a potential second. Subsequent outlets will not be as big as Ballymun, which Decathlon owns, but would still be about 3,000sq m, which is a substantial chunk of retail real estate, especially in a post-Covid-19 economy.

The group is first likely to see how Ballymun does. The signs at least are good. Irish consumers have responded well to Decathlon online, many are familiar with the French-based chain from holidays on the continent and a high proportion of us are active in some sport.

Grandgeorge also believes Decathlon’s reasonably priced goods will be popular in the post-Covid-19 world, where many families are going to have less spending money than before.

If that potential delivers, then it could boil down to rent. Decathlon is likely to lease its subsequent properties, so Grandgeorge makes it clear that landlords’ attitude will be key to where it opens next.

A few months ago, with full employment and predictions of fair economic winds ahead, commercial landlords might have been inclined to drive as hard a bargain as possible. Now, they are far more likely to recognise the “long-term opportunity” that Grandgeorge says Decathlon will offer.

You would have to say that the French chain has more than a sporting chance of getting the deal it wants from any prospective landlord.