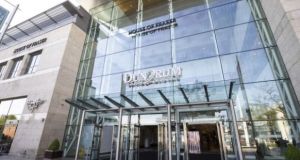 Along with Dundrum, the property giant owns stakes in the Swords Pavilions and Ilac shopping centres in Dublin.

Dundrum Town Centre owner Hammerson is to seek admission to the Irish Stock Exchange ahead of the UK’s exit from the European Union at the end of the month.

Along with Dundrum, the property giant owns stakes in the Swords Pavilions and Ilac shopping centres in Dublin, where it also plans a major redevelopment of the area around Moore Street. The UK-based group has operations in several European countries.

In a statement on Friday, the group said it was seeking admission of its entire issued ordinary share capital to the secondary listing segment of the official list of the stock exchange, which trades as Euronext Dublin. It is also seeking to trading on the main market for listed securities.

“The company is seeking a secondary listing given the importance and scale of its investor base and operations in continental Europe and the Republic of Ireland,” it said.

Goodbody analyst Colm Lauder said: “A secondary listing on Euronext Dublin will enable Hammerson to maintain an efficient holding structure across its portfolio and guarantee an EU equivalent trading venue for Hammerson’s shares.”

Hammerson owns and manages flagship destinations valued at £1.2 billion in France and £800 million in Ireland, in addition to significant City Quarters development opportunities in Dublin.

Alongside its directly managed portfolio, Hammerson also has exposure to value retail destinations outside of the UK including La Valleé in Paris and La Roca in Barcelona.

About 27 per cent of Hammerson’s share capital held by institutional investors is held by investors based in the European Economic Area (excluding the UK).

A secondary listing on Euronext Dublin will enable the company to maintain an efficient holding structure across its portfolio and guarantee an EU equivalent trading venue for Hammerson’s shares.

Hammerson said it expects the admission will become effective on December 23rd. The ordinary shares are, and will remain, admitted to trading on the main market for listed securities operated by the London Stock Exchange.

The company is not raising any new funds or issuing any new shares in connection with admission. No shares will be offered or marketed to the public in Ireland, the UK or elsewhere.

The company’s ticker on Euronext Dublin will be HMSO, the same as that which it uses on the London Stock Exchange.