Penthouse suite at newly-revamped Claridge’s to cost £50,000 per night 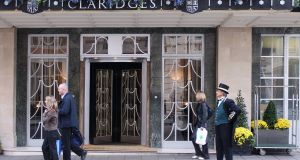 The penthouse suite in Claridge’s hotel has its own ornamental lake, half an acre of landscaped garden, a rooftop swimming pool and two glass-sided pavilions. Photograph: Andy Shaw/Bloomberg News

Irish businessman Paddy McKillen is planning a major expansion of his Maybourne Hotel Group while putting the final touches to a multimillion pound revamp of the five-star Claridge’s hotel in London, which will double the size of the property.

In a rare media interview, granted to the Financial Times’ How to Spend It magazine, Mr McKillen detailed a number of openings planned for 2021.

Late next year the Emory will open in London, and by May there will be the Maybourne Riviera, a hotel on the Grande Corniche overlooking Cap Martin.

The luxury Maybourne Beverly Hills opened earlier this year, with bed and breakfast rates starting at $595 (€485) a night.

In the new Claridge’s the penthouse suite at the top of the hotel will cost £50,000-plus (over €60,000) per night. Its features will include an ornamental lake, half an acre of landscaped garden, a rooftop swimming pool and two glass-sided pavilions, according to the FT.

Commenting on the challenges facing the business, Mr McKillen said: “Brexit is obviously a massive concern for us. It just doesn’t fit that we’re leaving Europe. ”

He also expressed concern at plans by British chancellor Rishi Sunak to end the VAT-refund scheme for visiting shoppers.

“Any idea that deflects or attracts guests away from London to Paris is a serious concern; absolutely we want our guests to shop in Bond Street and get their tax breaks. But I think overall, post-Brexit and the virus, London will come back. We’re just going to have to work harder.”

Mr McKillen recounted acquiring the Savoy group of hotels in 2004. Having arrived into Dublin from a trip to Japan, he went straight to his office where he received a call offering to sell him the Savoy, the Connaught, the Berkeley and Claridge’s for £750 million. He had just days to make the deal happen and only got to see the hotels after their purchase.

The Belfast entrepreneur decided then that Claridge’s needed a spa, pools, a fitness club, a cinema, a subterranean boutique-shopping mall and three new floors of rooms, while it also lacked a laundry and bakery.

Mr McKillen explains how he was told he would have to close Claridge’s to complete the massive refurbishment, which involved a major dig underground.

“I went down the Cu Chi tunnels in Vietnam, outside Saigon. Vietnamese farmers dug these tunnels by hand with spoons. They built hospitals and schools down there. And that’s how they defeated the Americans, with this network of tunnels. I came back and said, ‘are you saying we don’t have the technology today to do the same under Claridge’s? Of course we have, we must have’.”

In 2015, 75 miners arrived from Donegal to begin the massive dig, which involved going down 33m. Next year the fruits of their labour will become evident when Claridge’s opens its luxury new facilities.