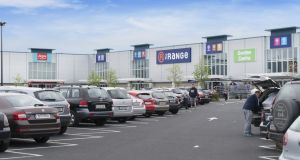 Schemes such as Liffey Valley Retail Park have thrived despite the impact of the Covid-19 pandemic.

It’s difficult to imagine things getting any worse for the retail sector than they did in 2020. But the chief driving force behind the decline of investor interest began long before Covid-19 arrived. There has been growing concern in relation to the impact of online retail and changing consumer trends on the long-term supply-demand dynamic for the bricks-and-mortar format. Much of this has been imported from the US where retail supply is five times that of Ireland, and the UK where it is 25 per cent higher and undergoing a sustainability crisis.

While the relative performances of these markets may already have been up for debate, the impact of Covid has ended the discussion. By mid-March the sector became virtually un-investable due to Covid-related uncertainties attaching to rental payments being added to those longer-term occupational concerns. The consequence of this is manifest in year-end investment turnover figures where retail will represent a record low 2.5 per cent of an anticipated total investment market turnover of € 3 billion. This from a sector that represented 24 per cent of investment turnover for the last decade (to 2019), but descending rapidly from a high of 53 per cent in 2016 to a previous record low in 2019 of 9 per cent.

Unsurprisingly for 2020 High Street retail has been worst affected with Grafton Street top of the list experiencing a 66 per cent reduction in footfall for March to October. While the street’s footfall figures had been holding steady at 25 million for the last two years, the 2020 outcome will be closer to 13 million.

No surprise then that almost a quarter of the units on the street are effectively available. Henry Street performed a little better as did some of the other city’s high streets, but the tone is similar. Next in line were the “comparison led” shopping centres which, as a general rule, saw footfall collapse during the first lockdown and rent collections plummet below 35 per cent. However, they did improve quickly and were less affected by the second lockdown. The burden of the service charge costs of running these mall-based schemes was exposed during these periods and will be a key factor in assessing the risk of ownership of these asset types in the future.

The retail sector’s star performers, however, have been the retail parks. Indeed, in the case of the 15 retail parks under Bannon management (between nationwide lockdowns) car throughput actually increased year on year for the period with rent collection rates approaching 100 per cent and impressive turnover increases. Even where tenants were adversely affected, low holding costs relative to shopping centres maximised the net income return to landlords.

If this crisis has accelerated the sector’s movement to the “retail endgame”, then retail parks and their occupiers have risen to the challenge. In this regard we envisage this asset type, along with grocery, to be the most liquid and popular sector for the year ahead.

Outside of this and following both Brexit and an anticipated mid-January lockdown we foresee a post-vaccine period of rebuilding balance sheets and filling occupational voids. While this period could take 12 to 24 months, there is little doubt that the rebasing of the sector generally will attract new investors wishing to get ahead of the recovery. This will probably manifest as loan trades first with a focus on fundamentally-sustainable schemes and high streets at attractive yields with occupiers who have embraced the omnichannel experience.

More sophisticated investors will recognise the buying opportunity that Covid-19 presents, especially if valuers fail to acknowledge the vast differences in performance across the sector.