Louth-born entrepreneur built homes and prime offices in Dublin, London and the US 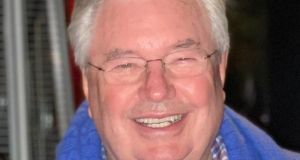 In a career that spanned five decades, John Flynn built thousands of homes and developed millions of sq ft of commercial space in Ireland, the United Kingdom and the United States.

But while his buildings in Dublin stretch from Smithfield and the docklands to Ballsbridge and beyond, he never sought the limelight, preferring instead to let his work do the talking for him.

It is something of a testament to him that two months on from his death in Los Angeles, one of the world’s most astute commercial property investors, Blackstone, is seeking to acquire Colony Capital’s interest in two of his best-known office schemes, Burlington Plaza and the Three headquarters on Sir John Rogerson’s Quay.

Born in 1943 in Ardee, Co Louth, Flynn went to St Joseph’s primary school before attending what he wryly referred to as “the old gulag” of St George’s College in Surrey. His home in Ireland was the Nuremore House Hotel in Carrickmacross, Co Monaghan, which his father James opened in 1962.

After qualifying as a surveyor from Bolton Street, in 1964 he entered into the most important partnership of his life when he married Leona (Lee) Fox from Carrickmacross. They were inseparable for the next 56 years and had three children, Jimmy, John and Elaine.

While Flynn’s first job saw him earning £60 a week as a junior surveyor with Healy Homes, he was let go for moonlighting after he was found building two houses outside of work hours. That industriousness, however, would inform the rest of his working life. Having sold those two houses, he built four more, and so began a multi-storied career.

Flynn played an instrumental role in transforming Dublin’s docklands. He introduced large-scale offices to Sandyford, developing Microsoft’s first Irish operations centre there in 1985, while in the 2000s he drove the development of the Hermitage Clinic in Lucan and the redevelopment of the Blackrock Clinic.

On a flight to New York in 1996, he found himself seated next to the then CEO of the Jones Group. By the time the plane touched down in JFK, they had agreed a £3.25 million deal for the sale of the company’s Clonskeagh headquarters. Flynn and his business partner and friend Paddy Kelly would go on to develop Belfield Business Park on the site and convince Compaq to set up its Irish operations there. The deal laid the ground, albeit inadvertently, for the arrival here several years later of Compaq’s acquirer, HP (Hewlett Packard).

In 1998, he shook hands on an £8 million deal with Charlie Duffy for his 1.05 hectare (2.6 acre) car scrapyard in Smithfield. Working with Kelly and Joe Linders, Flynn went on to develop one million square feet of residential and commercial space on the site as part of Dublin’s historic area rejuvenation project.

In the 1980s, he became a “name” in Lloyd’s of London, and in the 1990s he formed and led the Writs Response Group which brought the historic British institution to the European Court of Justice on behalf of its 3,500 members. The legal battle saw him dubbed by one insider as “Lloyd’s worst nightmare”. It also set the tone for a career in which he fought injustice wherever he encountered it.

While Flynn’s love of Ireland never diminished, he moved his family and his business to Palm Beach in Florida gradually over the last 20 years. In between building bespoke one-off homes for the city’s high-net-worth market, he indulged his love of horse racing, art, poetry and all music (except for Elton John). He reserved his greatest love for his family.

John Flynn is survived by his wife Lee and their children, Jimmy, John and Elaine, daughters-in-law, Dee and Suele, his 10 grandchildren, three nieces, and his sister Julie.

There will be a Mass in Dublin during the summer of 2021 to celebrate his life.