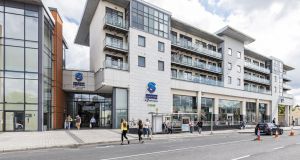 Swords Central occupies a high-profile position on Main Street, Swords, and has a direct pedestrian link to the Pavilions Shopping Centre

As the post-pandemic prospects for bricks-and-mortar retail continue to be debated, a fund managed by Davy Real Estate has taken advantage of the current uncertainty to acquire Swords Central Shopping Centre in Dublin at a significant discount to its €21.5 million guide price.

While the 15-year-old centre is believed to have come close to being sold on two occasions since being offered to the market by agent JLL in September 2018, the Davy investors are understood to have secured ownership of the property in recent weeks for about €11 million.

Swords Central is anchored by Penneys, which owns its store, and has a strong line-up of tenants, including More 4 Less, The Works, An Post, Dealz, Holland & Barrett, Specsavers and Starbucks.

Quite apart from its own location on the main street in Swords, the centre benefits from its direct pedestrian link to the adjacent Pavilions shopping centre. The UK property group Hammerson and its joint venture partner Allianz Real Estate own 50 per cent of the Pavilions, while the remaining 50 per cent stake is held by Irish Life and the Clyde Property Fund.

The news of the Swords Central sale comes almost a year to the day after Davy Real Estate paid about €175 million to secure full control of St Stephen’s Green Shopping Centre in Dublin, and just over one year on from its €35 million purchase of Athlone's Golden Island Shopping Centre.

While the sale had been limited to the combined 62.4 per cent stake of Madison International and Mr Molony initially, Irish Life decided to sell its shareholding following an unsolicited approach from Davy.