Against all odds: The Top 10 commercial property deals of 2020 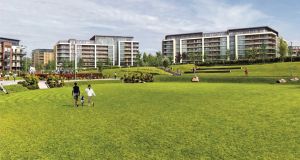 If 2019 can be said to have been an unprecedented year for the Irish commercial property sector, with a record €7.2 billion in transactional activity, the search for a single superlative to describe 2020 is far more difficult.

After starting the first quarter in much the same fashion as it had finished the preceding period, the market was brought to an effective standstill in mid-March by the unwelcome arrival of coronavirus.

While nine months later, and with the rollout of at least one vaccine on the way, it might be easier to assess the medium- to long-term impact, or otherwise, of Covid-19 on investment in offices, retail, logistics and other sectors, the early days of the pandemic presented uncharted waters for buyers and vendors alike.

Given those extraordinary circumstances, it’s remarkable to report that, as 2020 comes to a close, the volume of investment could potentially come in at up to €3 billion.

An examination of the top 10 deals, below, points to two conclusions. The first of these is that the death of the office has been somewhat exaggerated, while the second is that the housing crisis is still some way from being addressed.

1. Cualanor apartment portfolio €200m
In July, the Cosgrave Property Group secured the most valuable investment deal of the year with the sale for about €200 million of 368 apartments it is developing in Dún Laoghaire, Co Dublin to Deutsche Bank subsidiary DWS. The transaction represented the second purchase by DWS at Cosgrave’s Cualanor scheme in under a year. In May 2019, it paid €108 million for 214 apartments there.

While the deal may have been agreed prior to the arrival of Covid-19, Australian investment bank Macquarie Group and Patrizia AG showed their faith in the long-term prospects for the Dublin office market when they completed the acquisition for €182 million of Bishop’s Square from Hines in April.

Dublin’s core office market received another significant vote of confidence in November with French investment giant Amundi Real Estate’s €170 million purchase of the ESB’s newly developed Fitzwilliam 28 office scheme in Dublin city centre. Amundi stepped in to acquire the building after US-headquartered Morgan Stanley walked away from the deal in the midst of the initial uncertainty caused by Covid-19.

In July, DWS completed the first of two major investments in Dublin’s private rented sector in less than a week, when it paid the MKN Property Group €145 million for a portfolio of 317 residential units it is developing. The Prestige portfolio comprises a mix of existing and new-build apartments and houses distributed across four schemes in the north Dublin suburbs of Swords, Raheny, Clontarf and Killester.

In October, US real estate firm Kennedy Wilson booked an $85 million profit when it completed the sale for €141 million of the redeveloped and extended Baggot Plaza office scheme on Upper Baggot Street to German investor Deka Immobilien. The sale price reflected a net initial yield of 4 per cent.

Having already landed the biggest deal of the year in July, the Cosgraves returned to the fray in November with the completion of the €123.5 million sale of 297 apartments they are developing at Santry in north Dublin to a joint venture between Round Hill Capital and QuadReal Property Group.

Developers Johnny Ronan, Paddy McKillen and Percy Nominees certainly got their timing right with the completion of the Treasury Building’s sale to Google last February. Having engaged in negotiations with the US tech giant for over two years, Ronan and McKillen got the €115.5 million deal for the Grand Canal Street office block over the line just weeks before Covid-19 made its unwelcome presence felt in Ireland.

In July, UK property company Henderson Park Capital secured €94 million from the sale of 2 Burlington Road to German investment fund KGAL. The property, which serves as the headquarters of the EBS Building Society, had formed part of the Capital Collection, a portfolio of five prime Dublin offices that Henderson Park acquired as part of its €1.34 billion buyout of Green Reit in 2019. The portfolio, which is distributed across Dublin’s core central business district, also includes One Molesworth Street, 5 Harcourt Road, Fitzwilliam Hall and 30-33 Molesworth Street.

Having acquired La Touche House for a knockdown price of €35 million in 2013, Credit Suisse took full advantage of the recovery in the market last February when it agreed the off-market sale of the IFSC office block for €84.3 million to AXA IM and local partners BCP Capital.

The success of Park Developments’ Clay Farm residential scheme at Leopardstown in south Dublin continued in July with the forward sale of 192 apartments to Irish-headquartered Build-to-Rent (BTR) investor Urbeo for €75 million.

Outside of the top 10 deals by value, other transactions worth noting during the year include Henderson Park Capital’s €60 million sale of 30-33 Molesworth Street to German real estate fund manager KanAM Grund; the sale by Ares and Avestus of blocks 4 and 5 at the Harcourt Centre to Arena Invest for €54 million; Irish Life’s forward purchase of 94 apartments in Dalkey from Francis Rhatigan’s Winterbrook; KanAM Grund’s €35.1 million purchase of One Hatch Street from a private European investor, and French investor Corum’s purchases of One Kilmainham Square (€33 million), Classon House in Dublin 14 (€27 million), and Block 12 at The Campus in Cherrywood, south Dublin (€27.7 million).