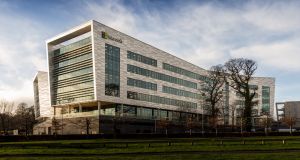 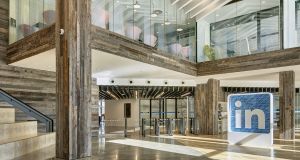 The Ireland-based headquarters of Microsoft and LinkedIn have both scooped prizes in the European edition of the International Property Awards.

The International Property Awards are granted to leading architectural innovation, with the winners announced at a ceremony in London.

Microsoft’s new 34,000 square metre campus-style headquarters in Leopardstown, Co Dublin, cost the company €134 million, and houses close to 2,000 staff. The building has an LED waterfall, an indoor mountain and a “dream space” for education.

LinkedIn’s EMEA HQ is centred around global communities and the “village centre”. The six-storey building is the social media giant’s first new build outside of the US.

Both projects will now progress to the final of the International Property Awards, which takes place in the Savoy Hotel in London on December 3rd.

Accepting the awards at the European edition of the International Property Awards,

RKD director David Petherbridge said the wins showed the company’s clients are being recognised for investing in the best of innovation. “Having two clients emerge as winners within Europe shows our strength and capacity for design excellence.,” he said. “The fact that both projects were based in Ireland is a bonus. The future of Ireland’s architectural landscape is bright and brimming with quality.”