O'Connell st footwear stores on go on the market 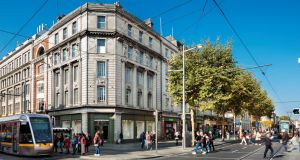 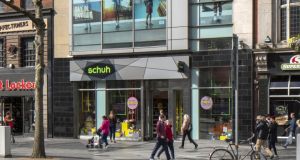 The Schuh store at 47/48 O’Connell Street

Just as plans are being readied for the redevelopment of the Clerys department store on Dublin’s O’Connell Street, two leading investment funds have opted to sell prominent retail buildings on the opposite side of the street.

Iput Property Fund has agreed a selling price of about €7.6 million for the Schuh footwear store at 47/48 O’Connell Street, and in the coming week Irish Life will start marketing the equally prominent former Clarks Shoes building at the junction of O’Connell Street and Middle Abbey Street. The CBRE agency is handling both sales

A private investor has bought the four-storey over-basement Schuh building, which produces an annual rental income of €480,000 and is subject to five yearly upwards-only rent reviews. It has an overall floor area of 907sq m (9,761sq ft), including 183sq m (1,976sq ft) on the ground floor and slightly less retail space at first floor level. The 25-year lease has about seven years to run.

Meanwhile, Irish Life is preparing to either sell or lease the distinctive former Clarks building, valuing it at €5.5 million or offering it on a long-term lease at about €275,000 a year.

The 1920s building is noted for its “Portland stone” facade and its spacious accommodation – 948sq m (10,207sq ft) in all, with the ground floor given over to the retail and the four upper floors in office use. There is also a good-sized basement. The upper floors are accessed separately from Middle Abbey Street.

Bernadine Hogan of CBRE said that while the building appeared to have been well-maintained structurally, there are internal areas in need of refurbishment. “We are expecting strong interest in the property,” she said “as O’Connell Street is very much undergoing positive change and will improve over the coming years with iconic retail, office and hotel redevelopments”.

The opening of the cross-city Luas service has boosted pedestrian flow between the north and south inner city and led to significantly more pedestrian traffic along O’Connell Street. This is expected to grow further with the upgrading of the Arnotts department store on Henry Street.