Proposed Eastgate campus east of city to have nearly 188,000sq ft of offices and hotel 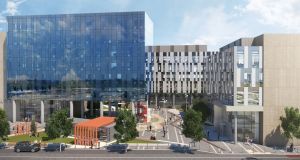 Computer image of the Eastgate office campus on the eastern side of the city, close to the proposed N6 Galway city ring road.

A leading Galway company has lodged a planning application for the first phase of a suburban office campus to the east of Galway city.

McDonogh Capital Investments, which is behind the €50 million venture, is a subsidiary of Galway-based Thomas McDonogh & Sons Ltd, which has traded in the county since the 1880s.

McDonogh & Sons originally specialised in the manufacture of fertiliser and animal feed but has since evolved into a property investment company with interests in Ireland and Belgium. McDonogh has been involved in the delivery of more than 74,332sq m (800,000sq ft) of office and hotel space in Ireland, France and Belgium, including the Dockgate building and Jurys Inn hotel in Galway. It retains a 37,166sq m (400,000sq ft) office portfolio in Belgium.

The first phase of the new Eastgate office campus will include 17,433sq m (187,649sq ft) of space in three blocks designed by BKD Architects. It will be located on the eastern side of the city close to the arterial roads and the proposed N6 Galway city ring road.

The entrance to the first phase will be from Ballybrit Industrial Estate and will not impinge on the existing McDonogh Trade Centre, which is located on an adjacent site. Later phases of the development will necessitate this business relocating to another all-purpose facility.

Eastgate will be delivered in three phases to include offices, public plazas, open spaces and a hotel. The grade A office accommodation has been designed to achieve Leed (leadership in energy and environmental design) Gold certification – the globally recognised standard for building sustainability achievement.

According to Patricia Staunton of real estate adviser Cushman & Wakefield, the campus will assist FDI companies in choosing Galway as an investment location.