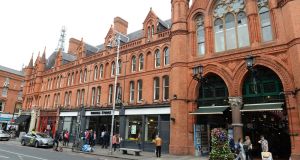 Dunnes Stores has purchased one of its busiest Dublin supermarkets after renting it for more than 50 years. It has paid €21 million for the freehold interest in the supermarket at South Great George’s Street, which had been owned by the Layden Group since 1992.

The disclosure of the sale was made by Layden in its latest audited accounts for the Revenue Commissioners.

Negotiations between the two parties had been ongoing for several years without the aid of property advisers. The final price agreed might well strengthen property values in the area, where a good proportion of the commercial real estate is owned by the Dunne and Layden families.

The supermarket and the adjoining George’s Street Arcade were originally bought at the same time in 1992 by the Layden Group at a knockdown price of €2 million. Property values had slumped as the result of an unusual currency crisis.

At the height of the property crash in 2013, the Circuit Civil Court cut Dunnes’ rent by 35 per cent.

The redbrick building is located across the street and about 200 yards from Dunnes’ new headquarters building. Under the ownership deal, it is understood that Dunnes will have the option of opening up a 30ft-wide doorway interlinking the supermarket and arcade.

The arcade has a diverse mix of about 40 traders selling everything from trendy fashion and accessories to funky music, coffee and cakes, coin collections and fortune-telling sessions.

In recent years the Layden Group has been approached numerous times by investors and property funds interested in acquiring the arcade, with a view to changing the business into an entertainment centre with a mix of restaurants, cafes and bars. The group has no plans to dispose of the arcade, which is seen as a jewel in the Dublin shopping scene.

The Layden Group’s consolidated financial statements for 2017 show that its expanded company emerged from the 2008 property crash largely unscathed, with shareholder funds, including investment funds, at €46 million after writing down assets by about €7 million.

In the throes of a falling market, its decision to enter and then exit the German market in the noughties so as to reinvest in Dublin through the purchase of Boole House in Clonskeagh, the Smurfit building in Ballymount and the O2 shop in Grafton Street, seems to have paid dividends.

The group, founded 40 years ago by Joe Layden, has been joined by five family members as directors – Gwen, Siobhan, Anita, Jack and Catherine, as well as an existing director, accountant Thomas Lavelle.

The George’s Street Arcade was Dublin’s first and only purpose-built Victorian shopping centre when it opened on September 13th, 1881. The retail complex did not initially appeal to ordinary Dubliners, possibly because of the usage of English architects and builders to develop it.

Tragedy befell the market on August 27th, 1892, when the entire complex was destroyed by fire, In due course the arcade was rebuilt in the same style, using local labour and craftsmen, and reopened for business on September 13th, 1894.