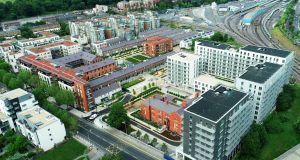 Kennedy Wilson looks set to take further advantage of the ongoing shortage of residential accommodation in the Dublin market following the completion of 246 new apartments in the third and final phase of Clancy Quay.

The delivery of the units marks the conclusion of a seven-year development programme at the Islandbridge scheme involving the construction of a total of 422 units alongside the restoration and conservation of the former Clancy Barracks.

Kennedy Wilson acquired the Dublin 8 development in a partially-completed state in 2013, paying just over €80 million for the scheme’s first phase of 420 apartments and commercial space, and 8.46 acres of undeveloped land set aside for the delivery of residential units in phases two and three.

Kennedy Wilson owns a 50 per cent interest in the scheme, while the remaining interest is owned by Axa Investment Managers as part of a joint venture between the parties involving 1,173 units across three of Kennedy Wilson’s Dublin PRS schemes - Clancy Quay, the Alliance building on South Lotts Road in Dublin 4, and Sandford Lodge in Ranelagh, Dublin 6.

Commenting on the completion of the Clancy Quay scheme, William McMorrow, chairman and CEO of Kennedy Wilson, said: “We are proud to deliver on our promise to bring much-needed residential space and public amenities to this vibrant market, and to continue raising the bar for multifamily communities in Dublin and across our global markets.”

Ali Rohan, head of Ireland for Kennedy Wilson added: “We are honoured to be associated with a property of such historical significance as the former Clancy Barracks, and proud to have preserved many of its unique and distinctive elements.

“We have delivered smart innovation across both the leasing and resident experience on top of the best-in-class resident amenities in a city centre development that people can call home.”

Clancy Quay represents just one of a number of new PRS schemes that Kennedy Wilson is aiming to deliver in Ireland. Between now and 2024 the US-headquartered real estate firm is targeting a total of 4,100 new units, with 750 of those due for completion by the end of this year.

Currently the company has more than $500 million (€441m) of development projects under way, with more than 1,000 apartments under construction. Among the schemes at various stages of the planning process and development are The Grange and Leisureplex at Stillorgan in south Dublin, and Coopers Cross in the city’s north docklands.

Quite apart from its involvement in the development of accommodation for the residential rental market, Kennedy Wilson is once again targeting distressed assets here in Ireland, the UK and in the US.

With the Covid-19 crisis continuing to cause uncertainty for commercial real estate markets worldwide, the company has established a new $2 billion platform with its long-term partners Prem Watsa’s Fairfax Financial Holdings with a view to pursuing first mortgage loans secured by high-quality real estate in all three countries.