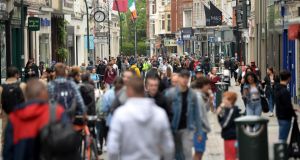 Coronavirus has delivered shockwaves to a retail market already under pressure. The lockdowns across Europe brought economies to a standstill with the vast majority of physical stores shut for prolonged periods.

Ireland, while a little behind many other European neighbours in terms of retail reopening, reached a major milestone with the opening (ahead of schedule) of enclosed shopping centres on June 15th last. But while almost all retail across the country has been given permission to reopen since then, not all retailers that can reopen will reopen.

What have we seen to date, what do we expect to see and what should some of the key retail real estate stakeholders be doing in both the short and long term?

Anecdotal evidence suggests that footfall and sales have been generally strong so far in the major Dublin shopping destinations. Some shopping centre visitor numbers are ahead of expectations. A preference towards car use may account for this as shoppers are currently avoiding public transport due to health concerns and capacity issues. It appears for now that the consumer is happy to queue for non-essential goods and willing to shop in a socially-distanced environment.

This should not be a surprise or be considered a portent for the future as a high level of pent-up demand has built up over the lockdown period in addition to an element of “revenge spending”, as consumers react positively to being able to physically shop again in high street and shopping centre locations. It is nonetheless a positive development, but it will likely be weeks or months before the full story will emerge.

We have seen numerous retailer casualties since the lockdown commenced. For those involved in the retail and retail property industry, there were very few surprises in any of the announcements to date and the virus merely accelerated the inevitable demise of certain (already struggling) retailers. These companies shared many common characteristics. They were highly leveraged, operated primarily in the fashion or footwear sectors and targeted a (crowded) mid-market customer base.

They also did not, would not or could not adapt their business models to compete adequately or effectively against the rise of pure online operations. The vast majority of retailers, while not out of the woods yet, are still standing. They, however, are in self-preservation mode, focused on rebuilding cash flows with any expansion plans well down the list of their business priorities. We expect their future expansion strategies, especially the larger retail groups, to be skewed towards the larger and more strategic destinations with an omni-channel (combining “bricks and mortar” and digital retail) approach resulting in larger floorplate requirements with the ability to accommodate an enhanced click and collect offering.

While generally eliciting little sympathy, the retail landlord’s uphill struggle seems as never ending as their retailer counterparts. Contrary to popular belief the majority of property owners are not tax-avoiding millionaires “sunning it up”, year round in exotic offshore locations. As a practical example, just under 70 per cent of non-owner occupied buildings on Grafton Street and Henry/ Mary Streets are owned by Irish institutional funds such as Irish Life, Iput, Aviva and New Ireland Assurance, who invest and manage our pension pots.

From what we have seen to date, the overwhelming majority of landlords have taken a pro-active and pragmatic approach in dealings with their tenants. Rent deferrals are a foregone conclusion and will ultimately translate into rent concessions. Landlord-tenant collaboration remains crucial and the pain arising from recent events and the burden of lost sales will have to be shared.

As there is no doubt retail vacancy rates are set to rise, it is ultimately in the landlord’s short- and long-term interest to support their retailer base where they are in a position to do so. Rents and values will drop. This will initially be through weak sentiment alone but will continue in the medium term as new transactional market evidence begins to emerge.

With the major high street and shopping centre destinations shut down for an extended period and a large proportion of the population forced to work from home, there has been a greater appreciation for the local communities and vital role that local retail can play in everyday life. It is in all our interests that this resurgence is continued. One of my main bugbears is unnecessary and counterproductive parking charge regimes in local retail locations. An example is Rush, a town in north Co Dublin. There is paid parking on the main street (where there is a high level of retail vacancy) while at the same time free parking is available in large supermarkets at the edge of the town.

Paid parking policies are largely designed to discourage shoppers from travelling by car and to encourage them to travel on foot, which is great in theory but ignores the fact that Rush has a large rural hinterland where walking to the shops is not always an option. Rush is just one practical example, but there are many more throughout Ireland.

Dublin City Council has introduced special planning policies in respect of Grafton and O’Connell Streets and sections of Henry Street which now need to be reviewed in the light of the coronavirus fallout. These restrict certain retail uses who require a special grant of planning before they can open. Cosmetic is listed as a restricted use and Rituals’ (a Dutch-headquartered cosmetics brand) recent successful entry to Dublin was delayed by this very planning policy.

At one stage the company’s frustration with this process brought them close to abandoning any plans to open here at all. We cannot afford the same situation to arise if other international cosmetics brands such as Sephora, Jo Malone or Morphe seek to open stores on Grafton Street. It should be borne in mind that it has been reported that over 50 per cent of Debenhams’ turnover in Ireland prior to their closure was generated from cosmetic sales. No doubt its demise has left a large gap in this particular retailing sector and is one example of a retail sub sector that may be in some way insulated from the growth of online shopping, as these goods cannot be purchased online, used and returned in the same way as clothing and footwear might.

Across Europe, economic assistance programmes have come in a variety of sizes and shapes and forms, but have all tended to revolve around relief and direct payment to retail and hospitality workers (who have been worst affected by closures), loan guarantees and backstops for businesses, tax relief and payment deferrals. Some of our European neighbours (Nordics, Switzerland, Germany) are certainly in a far superior fiscal position to provide robust relief schemes in these difficult times.

Ireland, like Spain, Italy and France, has higher levels of pre-existing national debt, so offering any relief programmes or more generous ones may not be possible due to the overly-negative effects on our debt-to-GDP levels. Politically we don’t see any scenario where any landlord in Ireland is getting any form of bailout. The new Government needs to think outside the box here and provide adequate solutions which will encourage a more speedy recovery, particularly for smaller Irish businesses and those in the sectors worst affected. Reopening retail is the first step but supporting it to recover and evolve will be an ongoing process.