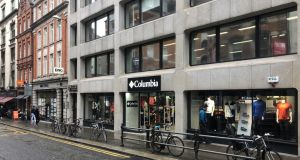 The company has signed a 10-year lease with a tenant-only break option in year five for the ground floor of 6-9 Trinity Street. Columbia’s move into the premises follows the departure after nearly 20 years of men’s fashion retailer, Jack & Jones. It is understood Columbia has agreed to pay a rent of around €125,000 per annum for the 1,500sq ft unit following its acquisition in an off-market transaction in March. Niall Delmar of JLL acted for Columbia while Hugh Markey of QRE acted for the new landlord.

Columbia is confident about the future of its business in Ireland with the support of its local retail partner, Great Outdoors, owned by Derek Moody and Ken Costigan.